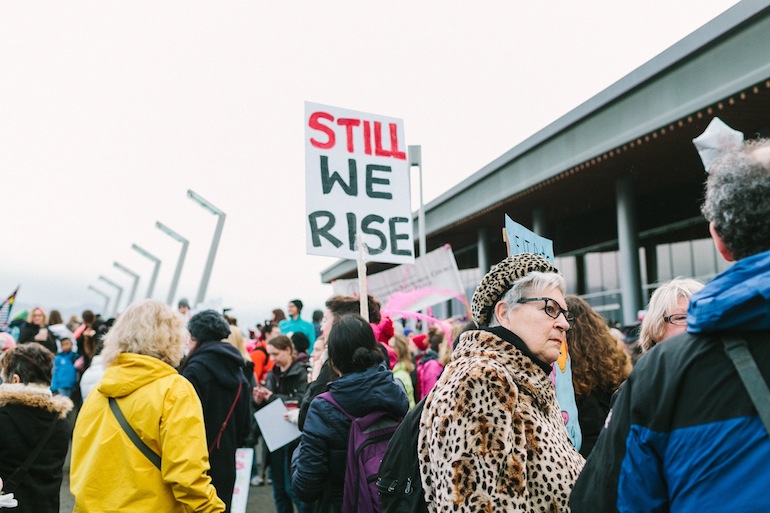 After Judge Brett Kavanaugh’s nomination to US Supreme Court Justice was confirmed, women’s rights activists (and, you know, just decent human beings) everywhere were left reeling – despite the powerful, courageous testimony by Dr Christine Blasey Ford on how Kavanaugh sexually assaulted her at a party when they were teenagers, his nomination went ahead. Protests have taken place in the recent days in the US to speak out against this disregard for a victim and to encourage authorities – and the world – to believe women, to listen to survivors of sexual attacks. Vilda’s Fashion Editor Sica Schmitz – a rape survivor and a long-time campaigner for women’s rights – shares a message of hope with a different point of view.

I’m not at all surprised with the results of the Supreme Court confirmation. Saddened, but not surprised.

What I keep coming back to is that this is the inevitable conclusion of living in a country and world where 99% of people are deeply influenced by the patriarchy.

Yes, I meant to say 99%, which likely includes you… yes, even you, my sweet, liberal friends.

This is where it gets unpopular.

I truly see the biggest issue facing our world to be this mixed up belief that some female bodies – human female bodies – are supposed to be considered sacred, while other female bodies are unworthy of consent, therefore it’s completely justifiable to touch, impregnate, and kill these other bodies for food or fashion or sport.

This ability to separate different bodies into worthy and unworthy, this kind of “other-ing” belief is at the root of racism, sexism, classism, and all other forms of injustice and oppression.

And so, if you do see things this way, if you do see female animal bodies as put on this earth to provide something for you, then, you’re viewing bodies from the lens of the patriarchy, which is the same lens that allows sexual predators to become Supreme Court Justice (just sayin’).

And I know that’s hard to sit with, and it’s uncomfortable to think that you might be operating under the same values as the people you’ve likely been judging all week, but this is also the good news. Because this is something you can change. This is something you have power over.

This is where it gets hopeful.

We don’t have to wait for the world to change, or for the next election. We each have the power to start ending the patriarchy, right now.

You have the power to dismantle your internalised patriarchal tendencies. I have the same power!

So yes, be angry. Write letters. Make calls. Protest. VOTE. But, until you start living a life that actually values female bodies – especially the most vulnerable ones, especially the ones that you perhaps weren’t raised to value – we’re going to see some version of Kavanaugh continue to repeat over and and over again.

Justice starts and ends with each of us and our daily choices.

If you have any questions about how to start removing the patriarchy from your closet and plate and start truly creating a world that is safe for female bodies, I’m always happy to provide tips and recipes and resources.

Vote for us as Best Vegan Magazine in the 2018 VegFest UK Awards!