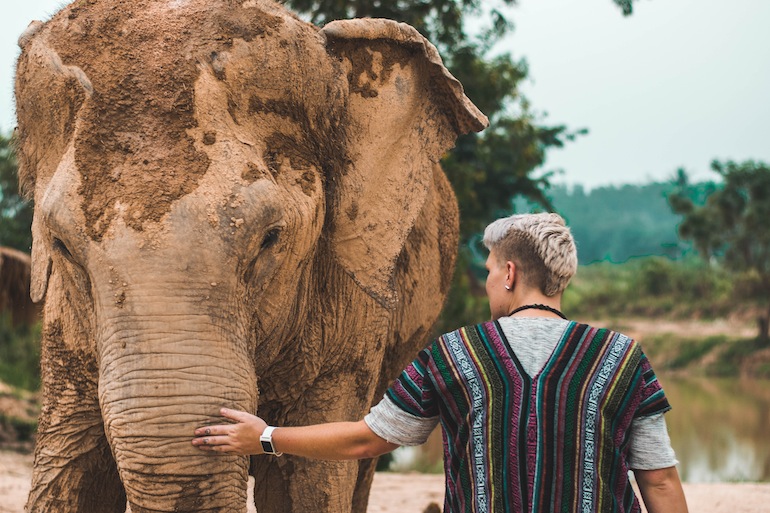 A frequently asked question in the world of veganism is: “why are there so few vegan men?” And it’s a legitimate question: the Vegan Society’s 2016 survey showed that only 37% of the UK’s vegans were men.

Despite the fact that the term “vegan” was coined by a man – the Vegan Society’s Donald Watson in 1941, vegetarianism and veganism have often been seen as women’s pursuits. Perhaps because taking a stand for other sentient beings can be seen as an emotionally based choice, made out of compassion (despite many of the motivations behind veganism being very rational), and emotions, as society deems, are women’s remit.

The link between veganism and masculinity  – or a perceived lack thereof – has been pondered for a long time.  In her legendary vegan-feminist ethics bible The Sexual Politics of Meat, Carol J Adams discusses this connection:

“In some respects we all acknowledge the sexual politics of meat. When we think that men, especially male athletes, need meat, or when wives report that they could give up meat but they fix it for their husbands, the overt association between meat eating and virile maleness is enacted. It is the covert associations that are more elusive to pinpoint as they are so deeply embedded within our culture.”

Many long-time vegans credit another man, Peter Singer, and his book Animal Liberation, for their vegan awakening. Decades ahead of its time, the book discussed the morality of animal use, and brought the term “speciesism” into popular use. But between 1975, when the book was released, and today, the face of veganism has morphed into a female, often white and slim one, most commonly found wearing yoga leggings and eating avocado on toast. Men who choose to omit animal-derived products have for a long time been few, far between and not very outspoken.

But this has changed, and it continues to change. Recently, the vegan movement has seen more and more male voices raised and heard. Admittedly, a few years ago, just being male and openly vegan warranted attention for going against the grain, mainly due to an archaic societal perception that “real men eat meat”, rooted in the outdated notion that you need meat to be strong.

A perception that could not be more wrong, as vegan athletes such as Brendan Brazier, Frank Medrano, David Haye, Colin Kaepernick, Patrick Baboumian and others show. Plant-based athletes, men and women alike, have stormed the scene in the last few years, proving that a championship-worthy diet no longer has to include meat – or other animal derivates. Since Lewis Hamilton’s much-discussed switch to a plant-based diet, even Men’s Health is encouraging guys to go vegan. And hey, there are scientific reasons for why vegan men are more manly – who’s to argue with science?

A change in perception

David, a musician who’s been vegan for 2.5 years, says: “It’s about the perception about the value of life – it’s independent of whether you are a human, an animal, a man, a woman, a child or an adult. People think that you are ridiculous for taking a spider outside instead of killing him/her – it’s seen as something a woman would do. But that which for me is a few minutes or bother, for that spider it’s his or her whole life. And he or she values their life as much as we value ours.”

Opinions like this – and public advocacy to go along with them – are earning the stamp of approval among the new cool crowd: in 2018, caring about social issues is on-trend. The new generation is awake, informed, and conscious. And most of the time, that includes veganism, as these quickly rising public profiles prove.

The men who are contributing to the rise of veganism

By spreading the message far and wide on social media, giving speeches at events and participating in eye-catching protest, these men have taken vegan advocacy to a new level: they’re making compassion cool, not only for the healthy crowd, but for regular, football-watching, video-games-playing, previously-steak-eating men. With their informed and inspiring ways, these men may just be the new voices of the vegan movement.

“I never once contemplated why someone wouldn’t eat animals. The morality of veganism wasn’t something I was born with. Culture and tradition are not good benchmarks for morality. In some cultures, it’s acceptable to treat a woman as less than a man.”

British activist Earthling Ed is famous for his calm approach and informed arguments, and just in the past couple of years, he has turned a multitude of people vegan, or at least put veganism on their radar, with his passionate speeches.

“I don’t want animal agriculture to exist, because we are breeding them to existence – the fact that these sentient beings are raised to be eaten does not change the fact that it’s immoral to take their lives.”

In his passionate debates with everyone from farmers to university students, UK activist Joey Carbstrong uses a technique that leads people to understand that they themselves agree with the vegan message – to then persuade them to take the step. He has debated with farmers in UK television and been on the receiving end of much hostility, but is also a much-loved figure in the vegan movement.

“I think one of the most dangerous mythologies in the fashion industry is that leather is just a by-product that would otherwise be thrown away, that they are making use of waste. This is just not the case. Leather is so valuable that without it, a lot of these businesses would go under.”

An adjunct professor at Parsons School of Design, founder of vegan menswear label Brave GentleMan and blogger at The Discerning Brute, Joshua is something as rare as a fashion industry professional who is outspokenly vegan and advocates for animal-free materials in fashion. His book, Fashion Animals, discusses the use of animals in fashion throughout history.

“You probably love animals or at the very least, you’re against animal cruelty. Yet, on the other hand, you probably pay to have animals mutilated, tortured and killed. You probably think you need meat for protein and cow’s milk for calcium. You probably think animals are treated “humanely” before they become a neatly wrapped package on the supermarket shelf. You’ve probably never wondered what is cruel about eating eggs or dairy.  I was the same.”

Cancer and eating disorders survivor James Aspey from Australia is a frequent public speaker known for his engaging stories of beating leukaemia and drug addiction and making the switch to a plant-based diet. His unusual forms of activism involve a one-year vow of silence, a 5000-km cycle ride and getting tattooed for 25 hours to raise awareness.

“I was going to a lot of hardcore punk shows and I met more and more people who were vegan…I became really intrigued with it, started to do my own research, started reading more books to understand why they had made this “extreme” choice, and I realised that it was the kind of thing I wanted to do. Most people agree that we should protect animals and that they shouldn’t suffer, how come so few of them actually make the effort to find out what’s going on in the food industry?”

Another Aussie, Jona Weinhofen is best known for his work as a guitarist in Bring Me The Horizon and I Killed The Prom Queen – but he is also an outspoken animal rights activist. Follow him on Twitter @jonaweinhofen for clever arguments against anti-vegans, info and more.