Walk into any big-name drugstore and you’re likely to see makeup advertisements featuring some of the young men you may recognize from makeup tutorials and reviews on Youtube and Instagram. When CoverGirl signed spokesmodel James Charles (followed by Maybelline signing Manny Gutierrez, a.k.a. Manny MUA), it signaled, in part, that the mainstream was welcoming boy beauty—and an unapologetically product-heavy version of it, too.

With big personalities to match their bingeable tutorials and reviews, these beauty influencers boast impressive, largely female followings. It’s no wonder cosmetics companies are eager to partner up with these men and make it known that their products are suitable for all. It’s important to take a moment to acknowledge how special this is–men who like makeup are being represented in a major way that would be have been hard to imagine not so long ago. This phenomenon is not without nuances, however. While featuring in beauty influencers in advertisements is undoubtedly a step in the right direction for inclusivity of non-binary expressions of gender, it’s understandably critiqued for appearing to have jumped onto a trend for the sake of generating sales—and staying afloat in an increasingly expansive, diverse, and competitive beauty market.

While certain brands like Tom Ford Beauty and Milk Makeup have featured men in their campaigns for quite some time, it’s the big-name pharmacy brands that are drawing the most skepticism. “It feels extremely gimmicky, in the same way that so many brands are campaigning feminism, or commodifying feminism to sell a product,” says Sable Yong, beauty editor at Allure. To what extent is this trend in advertising an honest reflection of the times—and to what extent is it savvy marketing?

Furthermore, the current style of makeup featured in these campaigns is elaborate and often high-concept, which is just one kind of look among many possibilities for both men and women. If beauty brands are serious about increasing their inclusivity, they must find a way to authentically reach out to men who desire to wear a moderate amount of makeup. After all, not all men who wear makeup are interested in beaming highlighter and Kardashian-levels of contouring. We’ve still some ground to cover when it comes to normalizing the middle ground that exists between a dab of concealer and larger-than-life faux lashes.

Regardless of how pharmacy brands are attaching themselves to men’s beauty, it’s safe to say that gender-fluid beauty—whether that’s skincare, makeup, or haircare—is more than a passing trend. Some men have worn—or have desired to wear—makeup for perhaps longer than women have been stealing their S.O.’s multi-blade razors. It’s only just now that we’re celebrating that fact, publicly and commercially.

Moving forward, we’ll be looking to the men and women sharing their passion for beauty on social media platforms to innovate trends for the beauty industry to follow—rather than the other way around.

A conversation on gender-fluid beauty that addresses only men in makeup isn’t a complete one, however. From makeup to perfume, beauty products have long glorified a rather narrow feminine ideal, often unwittingly creating an uncomfortable and demoralizing shopping experience that effectively ostracises non-traditionally feminine women and women who present as more masculine.

Many women, transgender women included, value and want to care for their appearances—but not all crave doe lashes from a frosted pink tube. In a powerful article for Yahoo, skincare brand Soapwalla founder Rachel Winard opens up about how limiting definitions of female beauty shaped her personal life and later her business. “I’m queer,” she says, “and I don’t fit society’s idea of ‘pretty.’ I usually joke that I look like a 12-year-old boy, but it’s true, and often means that people don’t think I belong in the beauty world.”

Winard describes the environment of most beauty departments as “hypersexualised and hyper-feminised” spaces that have made her feel unwelcome since she was a youth. When Winard set out to create her own line of natural skincare products, she fashioned her brand to be inclusive of all gender identifications by making each product gender neutral. Of Soapwalla’s pregnancy oil, she explains the product is labeled as such, “because pregnancy is a medical condition and there are certain oils you cannot use while you’re pregnant. So we call that out because it’s safe for pregnancy, but we do not call out who gets pregnant.” For Winard, product marketing is about more than on-trend natural ingredients—it’s about using the most inclusive language possible and allowing customers to imagine themselves—not necessarily a model or beauty influencer—using the product.

Although the past few years have witnessed a greater openness toward non-feminine presenting women in beauty, Winard notes that discrimination continues to play a role in the industry, and the existing examples of queer acceptance, like major makeup ad campaigns featuring men or the popularity of Queer Eye, are just the beginning. “I think misogyny plays a role, too,” she explains. “If something comes from a man, gay or straight, it lends a little more legitimacy than if it comes from a woman.”

Whether we’re hitting the local pharmacy or excitedly shopping the Crayola x ASOS gender-fluid (and vegan!) makeup launch, let’s take a cue from Winard and consider the language we use when talking about products and trends with our friends and on social media. Let’s be open and inclusive. It’s an exciting time for the beauty industry, and a lot is changing. But a few things will always be true: beauty comes in many different forms—and beauty is for everyone. 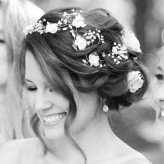 Mary Hood Luttrell is a vegan beauty enthusiast living in Corpus Christi, Texas with her husband and standoffish but lovable cat. Mary enjoys cooking veggie-filled dishes and practicing yoga and ballet. She is the Beauty Editor at Peaceful Dumpling and a writer at Barbara Michelle Jacobs and Debb Report.