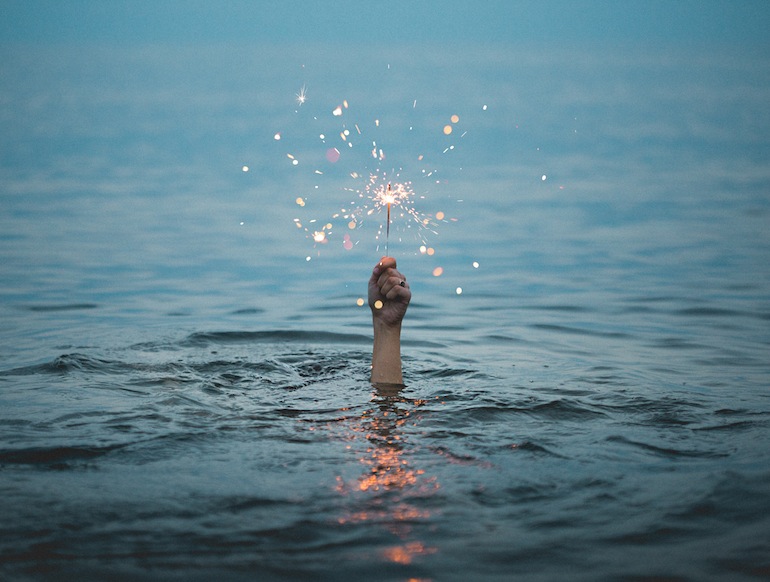 Last month I turned 35. And it was absolutely amazing. I celebrated for three days straight with family, friends, and lots of amazing food (vegan chocolate cake with soy whipped cream!). Other things I did during my birthday week:  got a tattoo, jumped until my feet felt like they were going to fall of at a rock concert, went on a boat ride, drank shots, had a vegan BBQ,  took many (sometimes drunken) walks home while the Swedish midnight sun was up, and so much more.

I didn’t stop to think about it, but the truth is, I felt much better about turning 35 than I did about turning, say, 29. I had a major crisis at 29 that revolved around a muddy idea of “youth” – whatever that is – being over, and the onset of Actual Adult Life rushing at me at full speed. I panicked about not being ready for anything that involved responsibility, mortgages, or committing to something as daunting as choosing what country to live in. But somehow, I reasoned, this was all inevitable. It was just what “everyone” did when they left their twenties.

…and then I moved to London, lived with people I didn’t know, wrote magazine articles from different cafes every day, and hung out at rooftop bars. I explored new surroundings, met new people, became a new person. And I came to a realisation:

You don’t have to do anything by any age.

This is such a simple concept, yet it took me 29 years to get there. Once I fully arrived at understanding that I could keep on living the life I wanted and craved, despite the rest of the world hurrying along to fulfil the next goal on the ladder of degree-marriage-job-kids-house-retirement, my life fell into place. I mean literally fell into place: I found my dream job, I started this website, I found a wonderful tribe of friends, and I was finding myself more with every day. Just by taking the time to understand that I didn’t HAVE to have kids, a car and a mortgage if I didn’t want them, and that those decisions wouldn’t ruin my life, bring on endless regret or make me a permanent outcast among “normal” humans, made my life so much simpler, happier, and full of meaning.

We are an increasingly stressed generation. Increasingly, we worry about things that are out of our control, such as job security, cost of living and not measuring up to the perfectly edited, curated life standards imposed on us by social media. And despite the current trend for “designing your own life”, the age-old milestones of what makes a Successful Person remain the same: university degree. Job. Own Home. Car. Marriage. Kids. Promotion. Retirement. Only when those things got defined as the blueprint for a good life, they were much easier to obtain than they are now – causing the younger generation further anguish by imposing standards that previous generations have made sure to keep out of their reach. Realising that not only are you unable to fit into the pre-defined life standard, but you don’t actually want to, can be both very uncomfortable and very liberating.

Kids. Unless you want them! In that case, go ahead. But if you don’t, or you want to wait, stop stressing out about “biological clocks” and other patriarchal nonsense that reduces women to just bodies. If you change your mind, like in the preferred scenario of your friends with kids, you can always adopt – there are 153 million kids out there just waiting for a home.

A house. I rent, millions of others like me rent, and we’re all fine. If owning your own home is a goal for you, I hope and believe that you will get there – but if you’re not decorating your new abode by 30, don’t beat yourself up. The fact that you don’t have a house is not your fault anyway, so keep making those Pinterest boards for what your dream house will look like, but don’t feel stressed about still writing your landlord a check every month in the meantime.

A set-in-stone career. I had a job in fashion when I was 30 – it wasn’t until I was 32 that I completely changed careers and became a professional animal rights activist instead. Nothing is forever, and nothing has to be unless you want it to.

A degree. My husband is 40 and started university and became a working student last autumn. He’s the most non-conformist badass I know, and I am so proud of him. And he is studying music – not the most stable career path in the book, but he is doing it, and he’s doing it well. In most cases, it’s literally never too late to do anything you want to do.

A marriage. I have one – I can’t pick a country to call home, but I have no problems committing to a man, it appears – but let me tell you a secret: absolutely nothing changes when you get married. The wife-life is not that different, if at all, from co-habiting partnership. So if you’d rather go on an epic around-the-world adventure than paying for a really big meal for some cousins and great-aunts that you haven’t seen since you were fifteen, you have my blessing. Also, obvious point: being single is awesome and you can meet someone to love at any age. My father met his current wife when he was close to 60. Besides, nothing is as much of a turn-off as the desperation of “I have to be married by the time I’m 30, and I don’t really care to whom”.

A driver’s license. Depends on where you live, but I have never – never!- driven a car in my life (well…if you discount a very random parking-lot driving lesson in LA in 2002 when I almost crashed a friend’s jeep) and I have managed to live a full, rich, wonderful life so far. Just thinking of all the money I’m constantly saving on car maintenance makes me smile, not to mention the environmental impact.

A six-figure salary. Although of course that would be nice – but tying income goals to your age could cause stress and lead you into work paths that you would not otherwise have taken. Sharpen your skills, follow your passion, and if it makes you a millionaire then great! But otherwise, there are more interesting things in life than money.

Matching socks. Really, your life is too short and precious.

What really matters to me at 35 is that I wake up every day excited about my life. I have completely lost that Monday-morning dread that used to fill the pit of my stomach every week when I trudged off to my “glamorous” job in the fashion industry. But the memory of that dread, and hence the experience of having lived through it – is something I am truly grateful for. It makes me remember that life is for living, not for just surviving. At any age.

This month I am watching…Orange is the New Black new season is out at the end of the month!

This month I am reading….How Not to Travel the World by Lauren Juliff and Thinner by Stephen King

This month I am planning…to attend a vegan festival here in Brighton. Bring on the food.

Photo by Kristopher Roller via Unsplash