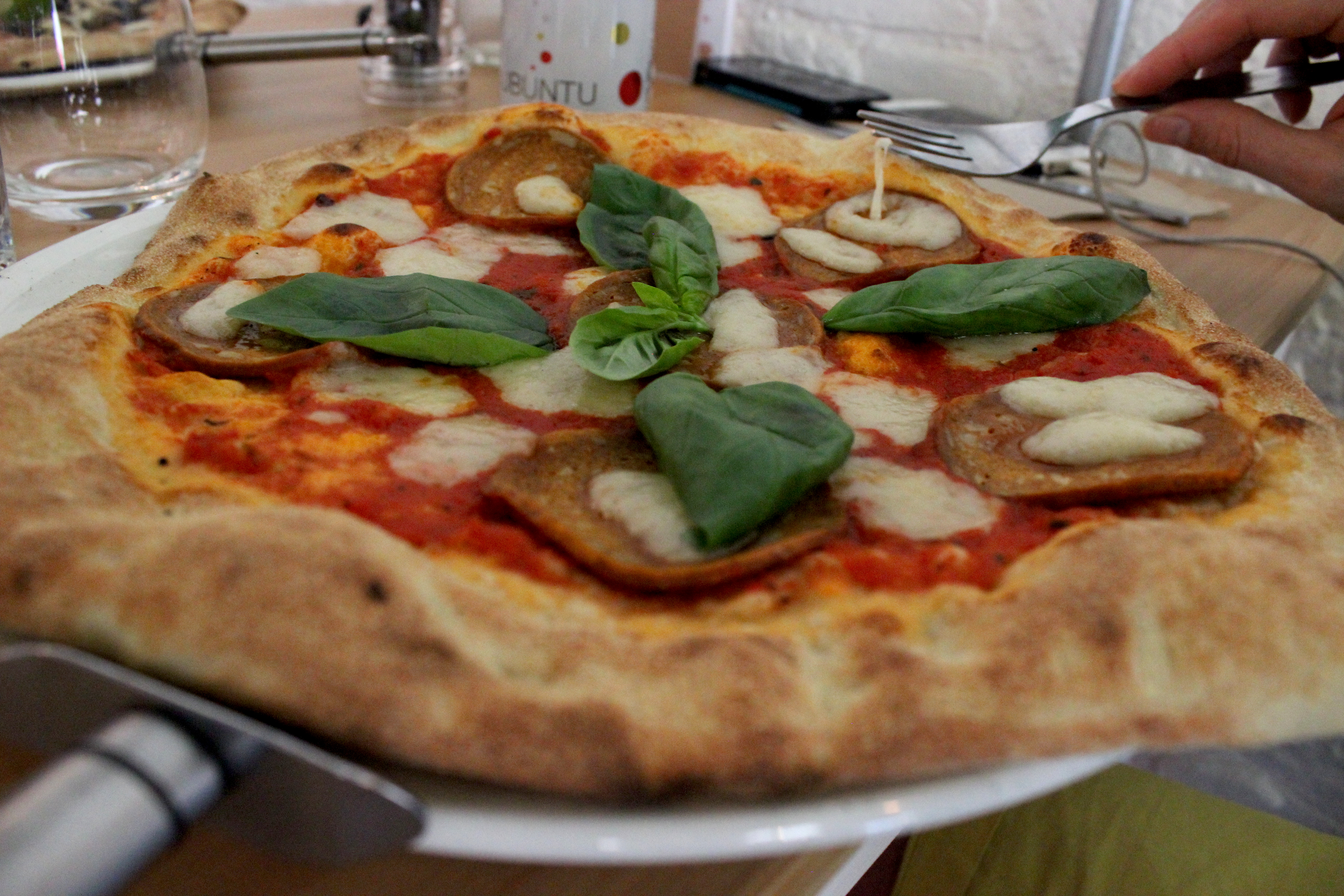 When I first moved to London in 2012, I was only transitioning to vegan living. I must be the only person on the planet to NOT have been a cheese freak until I went vegan. Vegan cheese is among my favourite indulgences today, but I was never one to ooh and aah over some brie or gorgonzola made from dairy. So skipping pizza topped with one of my least favourite cheeses – mozzarella – was no hardship. Every time I found myself holding a pizza menu, I knew exactly what I wanted. A veggie pizza without cheese. Easy. Might have gotten me a few weird looks from waiters (“no cheese? Are you sure?”), but in the end, it was always fine. And delicious.

But not as delicious as what I have to look forward to in many of my local pizzerias today. Vegan cheese – from cheddar-y flavours to stringy, mozzarella-like textures – is taking over the UK pizza landscape. And no, it’s not just because I have taken the plunge to move to Brighton – one of the most vegan-friendly cities in the country – this is a revolution that’s happening all over the country, as proven by PETA’s list of best pizza takeaways in the UK.

Among the first chains to offer vegan cheese, Zizzi now boasts an entire vegan menu. Their MozzaRisella cheese is made from wholegrain germinated brown rice and is created by a third-generation cheesemonger. It has a soft, creamy flavour and is quite delicious. London-wide chain Firezza is another early adopter – they have been offering Violife vegan cheese on their pizzas for two years.

If chains aren’t your thing, independent pizzerias are doing a fantastic job of catering to vegans. La Favorita in Edinburgh was the first restaurant in the city to offer vegan cheese pizza. Ecco Pizzeria in Leeds has vegan mozzarella on the menu and if you’re dining at London-based Village Pizza, you can even order a vegan chicken pizza (note: chicken on a pizza isn’t something an Italian would approve of. However, I would probably try this pizza out of curiosity)!

As a recently adopted Brightonian, I have nothing but marvel for this city’s incredible food scene. Aside from a vegan scene that has inspired countless vegans to flock to the city, Brighton is also home to a variety of flavours second to none. Anything you wish to taste, you can find it here – whether it’s junk food or superfoods, it can be ordered in a pretty seaside restaurant. And chances are it’s vegan. 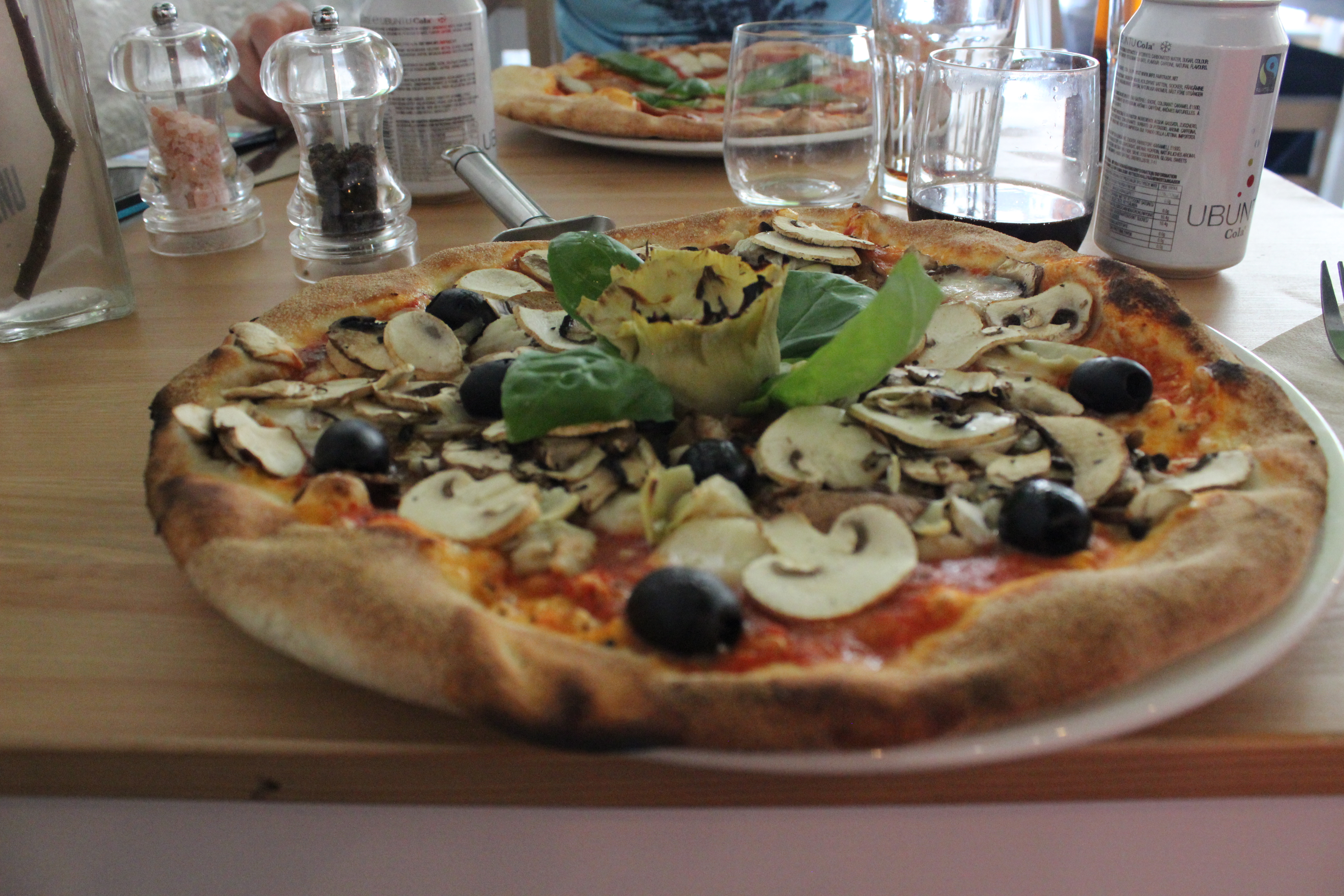 Pizza is certainly no exception. Purezza, the first all-vegan pizzeria in the UK, opened its doors last year and has since then had a makeover and a new menu, and it is constantly packed. Their secret? Perfectly authentic flavours. The soya, rice milk and coconut cheeses are made in-house, and the mushrooms arrive fresh each morning. Some of Purezza’s classics include four-cheese pizza (obviously all four cheeses are vegan), Fumosa with smoked beet and tofu, and Parmigiana Party, topped with sausage and vegan parmesan. 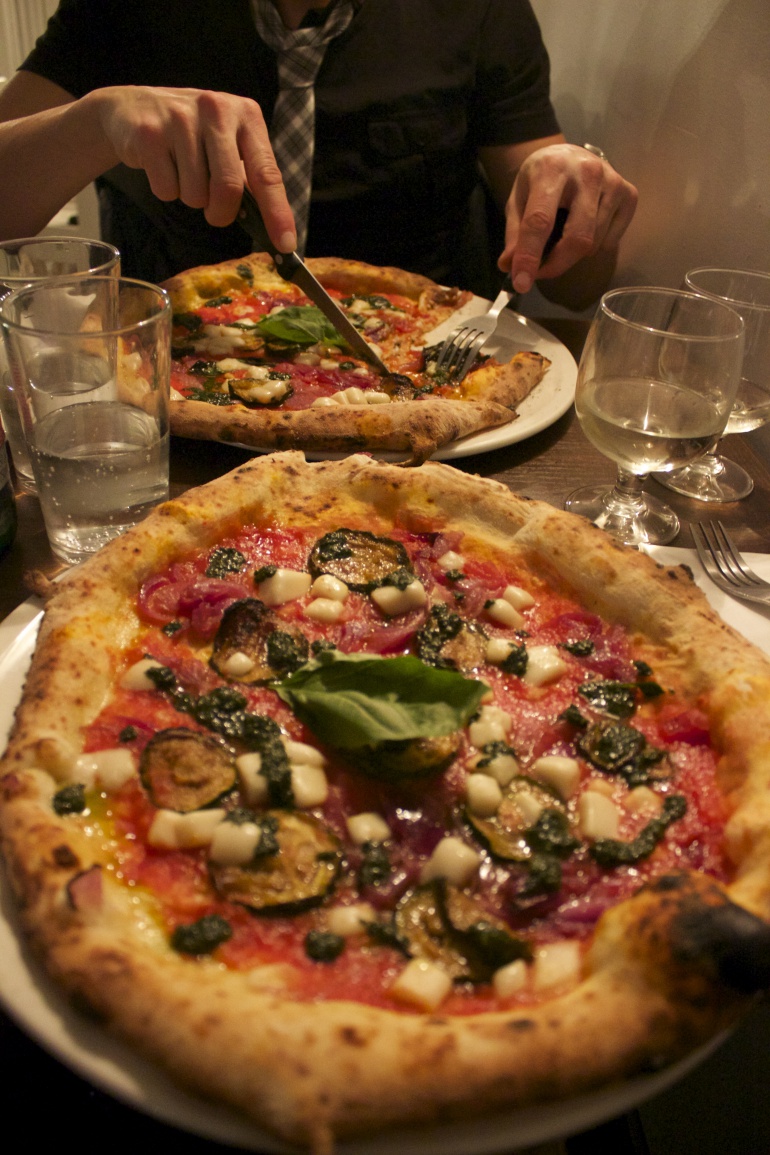 Another sign that vegan pizza is taking over: mainstream pizzerias add vegan options. Here in Brighton, beachside Naples-inspired Nu Posto  offers vegan cheese, as do Fatto a Mano, where we were invited to try the new vegan flavour. The cheese, Mozzarisella, comes from Treviso, Italy, and is made from rice milk. It has a soft texture that blends perfectly with the other ingredients. At Fatto a Mano, vegan Mozzarisella can be added to any flavour, but Vilda recommends the Vegana pizza, topped with courgettes, vegan pesto and my new favourite ingredient on a pizza – caramelised onion.

“We started out serving cheese-free pizzas as a vegan special. As our vegan customers started asking us for a cheese they could eat, we started sampling” says owner Rupert Davidson. “After trying many different types, including cashew cheese, we trialled Mozzarisella. It’s a fermented rice cheese with flavour and texture, that melts. Our vegan customers love it, and it turns out that it’s from Treviso, in Italy so it’s a perfect vegan combination”

And there you have it: how change is obtained. If you ask for the change you want, you might be making things happen for yourself but also for other vegans. So always speak out, and you just might find yourself eating vegan cheese pizza on the beach.