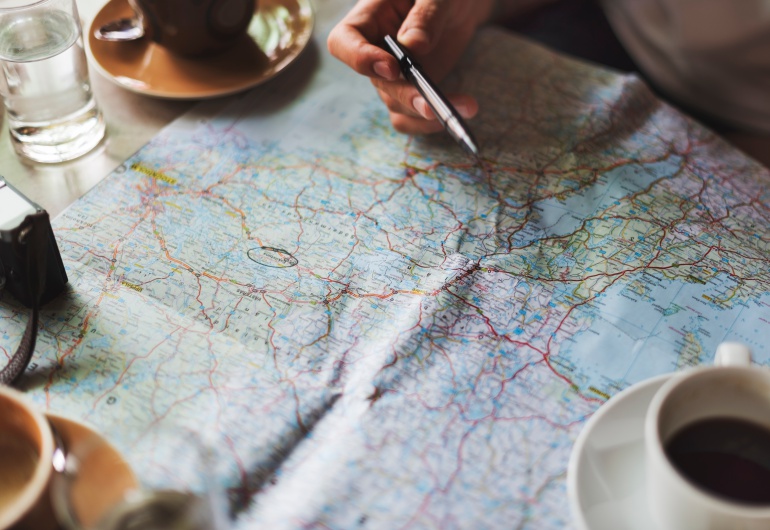 Travel is one of my greatest passions in life – whether it’s a sunny beach or a busy city, exploring new places (or returning to old favourites) is the ultimate buzz for me. And believe me, travel as a vegan is even more exciting.

Finding vegan-friendly spots in new places has gotten more interesting since my husband joined me as a vegan. These days, we explore together rather than me hunting down plant-based restaurants and him reluctantly trailing along (but then inevitably loving it). I love finding hidden gems like plant-based bakeries or raw-food restaurants where you’d least expect them (seitan roast in a seaside Portuguese town, anyone?) but I also adore just going with the flow, closing down Happy Cow and thinking, “what would I eat if I lived here?” This carefree attitude goes hand in hand with my “when in Rome” approach to travel: instead of seeking out the tourist spots, I like to imagine that I’ve just moved to the place. Where do I shop? What do I eat? Example: after visiting the busiest beaches in Corfu, my husband and I skipped the popular spots one day and just made our way along the road where our hotel was located (easier said than done, since Corfu has no sidewalks) until we made it to an idyllic secluded pebble beach where we were pretty much alone all afternoon. Same goes for what we eat: wherever we end up is an adventure, and I take it as a personal challenge to find vegan dishes absolutely anywhere.

An Alien Walks Into a Bar

Restaurant staff in most bigger cities I’ve lived in and visited are often well aware of what “vegan” means – which doesn’t mean they always cater for it, in other ways than a salad, but at least they are aware of the meaning. Whereas if you happen to holiday in smaller towns, learning how to say “I’m vegan” in the local language is often not going to cut it – simply because not enough people are aware of what exactly it entails and you might end up with cheese sauce all over your lettuce leaves. And even if you do explain exactly what it is you do and do not eat, don’t necessarily expect to be understood. If I only had a penny for each time a waiter stared at me like I was an alien! My personal advice would be to simply choose a dish on the menu that is vegan, i.e penne all’arrabbiata, a marinara pizza, Greek dolmadakia or similar (but then again, I am the kind of vegan who won’t ask many questions or double-check the preparation of my dishes, i.e which pots and pans were used, and so on) and just go with the flow.

The Internet Is Your Best Friend

…as usual. Most vegans are familiar with Happy Cow by now, but the world wide web has endless resources regarding vegan options abroad, including blogs and discussion forums. Read as much as you can and remember not to be discouraged by the apparent lack of veg(etari)an restaurants in your chosen location – as I mentioned above, you can often get a vegan meal at a mainstream place. Some of my best meals while travelling have been vegan options at non-vegan restaurants!

I once read something on Facebook that was meant to be a response to those saying that it wasn’t possible to be vegan in any country. The post brilliantly pointed out that it IS entirely possible to be vegan absolutely anywhere, as fruit, vegetables, grains and beans are available anywhere across the globe. This brought on the realisation that it’s simply not necessary to go out to a restaurant for EVERY meal of EVERY day of your holiday. If you are renting somewhere with a kitchen, bingo! Find your nearest supermarket – imagine my surprise in Corfu when the local mini-market was jam-packed with plant milk! – and go nuts (literally). If you’re staying in a kitchen-less hotel, get a few cans of beans for your minibar fridge, and pick up some grilled veg and bread to make sandwiches for lunch. Saves you some cash, too.

My Latest Mediterranean Trips, in Order of Vegan-Friendliness:

1. Italy. Recent spikes in vegan living in Italy has brought on an amazing rise in plant-based options. Italian cuisine is quite rich in vegan foods naturally – I’m talking countless pasta dishes with vegetable sauces, meat-free pizza and more – but big cities are now aware of veganism and cater to it with surprising creativity and flair. See one restaurant in central Milan that has perfected the art of raw food here.

2.Portugal. My first-ever visit to Portugal last autumn brought me to the amazing Boutique Hotel Vivenda Miranda, but it also showed me just how vegan-friendly this country can be. Case in point: tiny Lagos, the seaside town we stayed in, unexpectedly featured both seitan roast and a tofu curry!

3.Spain. If you’re visiting Barcelona, you’re in luck – the city actually has a programme to promote plant-based living. Bigger cities are often familiar with veganism and vegetarianism, but even smaller towns can be good at offering meat-free options: I survived on veggie paella and grilled vegetables (with the added protein of cans of beans in my hotel room!) during my holiday to Costa Brava. I’m not usually a fan of potatoes (shock, horror!) but with lack of other options can be convinced to try patatas bravas – everything tastes better fried!

4.Greece. Whereas meat and fish still largely rule the menus, Greek food does have some true delights for vegans. The aforementioned dolmadakia – vine leaf wraps with rice – are one of my favourite dishes on the planet. Tip: check the starters and side dishes on the menu when out in Greece. You can often find exceptionally made bean dishes and aubergine salads, which will truly delight your palate. Supermarkets also provide good selections. See Vilda staffers Jessica and Giulia’s experiences in Greece here.

5.Malta. And here, we enter challenging territory. While Malta is absolutely stunning, the food is somewhat disappointing. Despite 37C heat, most food on offer during my holiday was fried and heavy: potatoes and rabbit (traditional dish) or other heavily cooked dishes which were better suited to chilly winter days. Anything even remotely healthy was difficult to find, but my struggles were all repaid at the fantastic Sammy’s by Culinary Forward Malta, a 100% vegan menu with amazing locally grown produce. So, as you see, vegan delights are to be found even where you least expect them.

And lastly: when in doubt, pizza. Always. Veggie, no cheese. Easy solution to any vegan food dilemma.

This month I am watching...the new season of Orange is the New Black on Netflix

This month I am reading...Cat Marnell’s How to Murder Your Life

This month I am planning…my upcoming house move. Ugh.