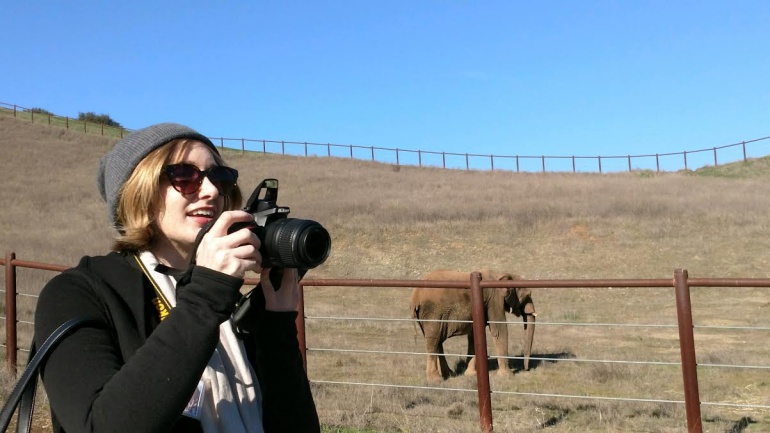 My grandmother adored elephants. It was kind of her thing. Her home was filled with elephant photos, decor, jewellery, small figurines; gifts from her family, her friends, her husband, and everyone who knew and loved her. And I never really understood it. I mean, sure, I thought elephants were fine, but in my youth I was really into tigers. And house cats.

She passed away unexpectedly when I was nineteen, taking with her a unique kind of graciousness and leaving behind her huge collection of elephants, now spread out between relatives. Some of the pieces I inherited from her included a knife set with elephants carved into the handles, a gold elephant necklace, and an elephant pendant, so elephants have been a steady part of my life for many years. And that was fine, since one can only own so many cat trinkets, after all. 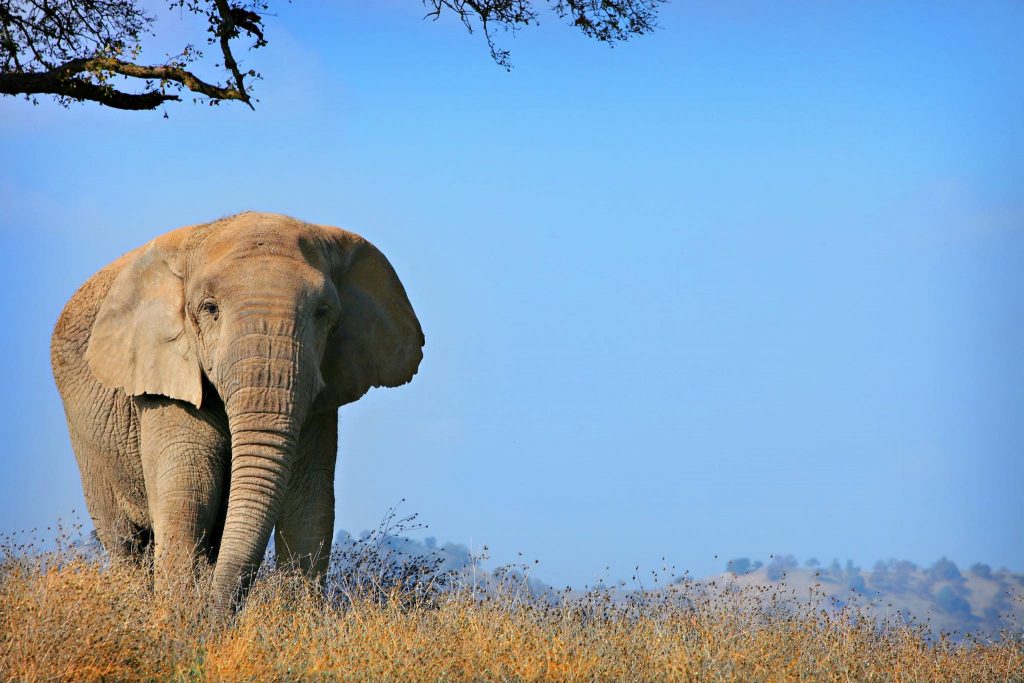 I don’t know if it was simply maturing or if the effects of veganism had finally opened my eyes to the magic of these large gentle vegans, but once I reached my thirties I become a bit more interested in elephants. It started slowly, with an occasional adorable elephant baby on the internet, and moved into me fostering my own orphan elephant in Kenya at the David Sheldrick Wildlife Trust, and next thing I knew I had two back-to-back trips planned to visit elephants on two continents, starting with a trip to PAWS.

I first became aware of PAWS (Performing Animal Welfare Society) through Lily Tomlin’s heartbreaking documentary An Apology to Elephants. PAWS is an animal sanctuary which rescues wildlife from captivity such as zoos, circuses, and private owners. It began in Northern California over 30 years ago, started by husband and wife Ed and Pat Darby, originally as a safe haven for animals retired from the film industry and evolving over time to be not only a sanctuary for all forms of abused and neglected wildlife but also a non-profit focused on education and policy to help prevent animal captivity. It now has three locations and over 2400 acres, caring for elephants, lions, bears, tigers, deer, elk, emu, and more. Four times a year they open up their sanctuary for Seeing the Elephants, a day of touring the property, learning about the importance of keeping wildlife in the wild, and…. well, seeing the elephants. While Pat Darby passed away in 2013, her husband Ed still carries on the sanctuary and the tours. 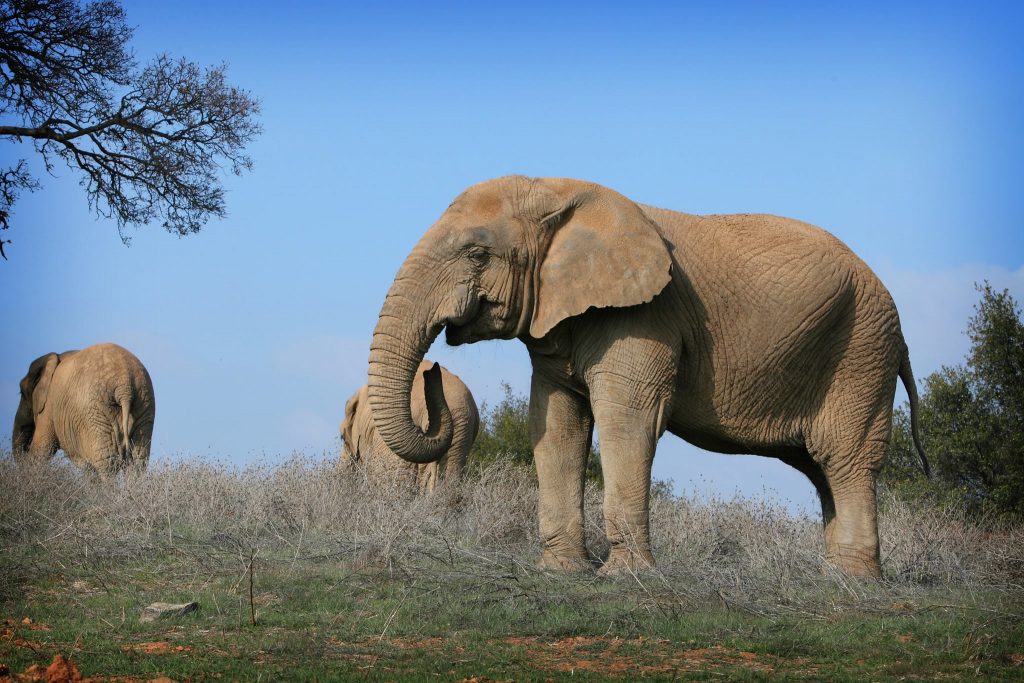 I arranged to visit PAWS last December with a group of friends and family from across the west coast, a multi-generation gathering of animal enthusiasts coming together to see the elephants. It’s about a 5-hour drive from Los Angeles, or you can fly into Sacramento airport. We arrived the night before the tour and stayed in the darling pioneer town of Jackson, CA, which is home to a quaint family-owned restaurant called Rosebud’s Café. If you go, definitely try the vegan apple pie, it’s divine.

The next morning was chilly and sunny. The first stop on the walking tour was to meet Lulu, Maggie, and Mara, three female African elephants each with unique stories. I had been to zoos when I was younger (and before I knew better), but this was my first time experiencing elephants in a natural habitat. To see these majestic creatures happy, healthy, and roaming free (free-ish – their pastures are fenced for safety though they have large spaces to roam) was unlike anything I could have imagined. 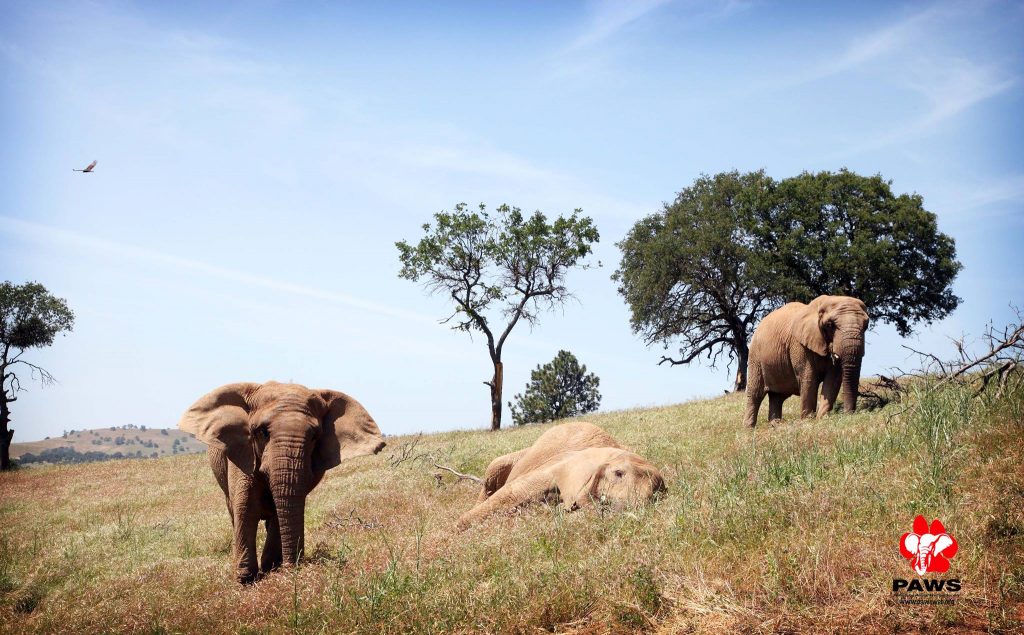 Many of the elephants arrive at PAWS with deep psychological scarring from years of separation anxiety, small enclosures, abuse, and boredom. Captivity also causes physical issues such as foot and joint diseases, and captive elephant lives tend to be decades shorter than those in the wild. Knowing that these beautiful elephants were given a chance to live long lives and form deep friendships restored my faith in humanity. And theirs too, I’m sure.

Next we met Prince (an Asian bull), Gypsy (an Asian matriarch), and two more African elephants who were rescued from the Toronto Zoo named Thika and Toka. I was absolutely awestruck by each and every one of them and their incredible resilience. Each had a heartbreaking history, and yet, they are willing to forgive, to trust, and to heal, a truly inspiring feat for any creature. 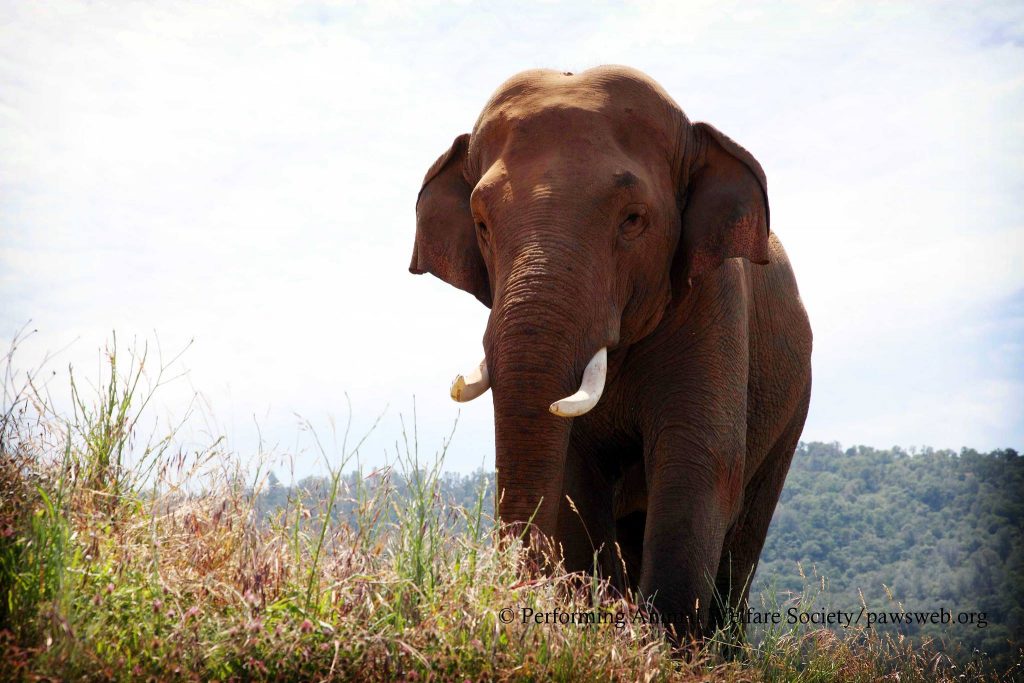 According to PAWS, there are currently 89 bull elephants in captivity in the United States. 51 were captive born in breeding facilities, 38 were captured in the wild and separated from their mothers, and many saw the mass slaughter of their families during culls (the government sanctioned systematic killing of adult elephants in order to control populations). These elephants are now with circuses, zoo, or are used in the entertainment industry, and many live alone, sometimes in small enclosures.

The average bull elephant in captivity is transferred to different owners or facilities at least three times in his lifetime and will spend most of his life alone and away from nature. Ed shared that there have been times PAWS has taken in elephants who had never touched grass before, and were scared or hesitant when first being released into the unfamiliar open fields. It was a sobering reminder of just how important it is to keep wild animals in the wild. 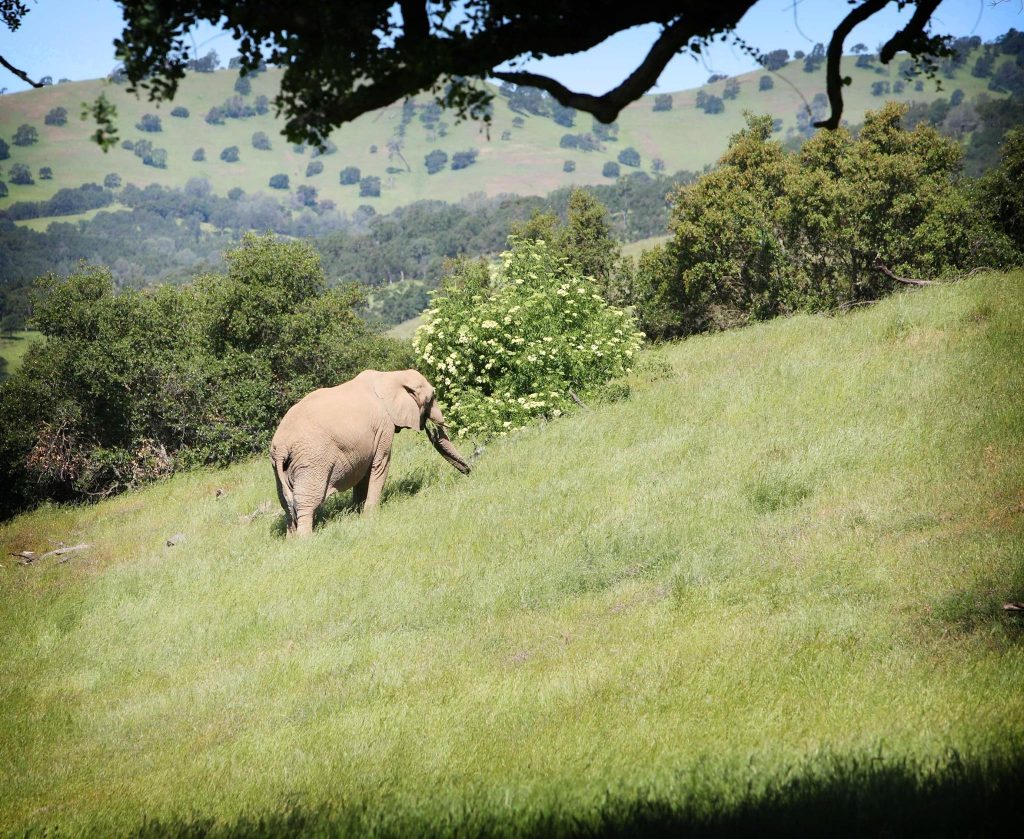 The next stop on the tour was lunch, a catered meal served on a hill which overlooks the expansive property. Since PAWS is run by vegans, they offer only vegan or vegetarian meal options to guests. And let me tell you about this meal. I’m sure you think you’ve had some pretty good sandwiches in your lifetime, but until you have enjoyed a sandwich, in the sunshine, while watching elephants roam the pastures below you, I’m not sure you’ve ever really enjoyed a sandwich at all.

Afterwards we got to meet Nicholas, the largest elephant at PAWS. He was enticed into his barn where Ed showed us how he handles the elephants. Pat and Ed pioneered a method of elephant handling that uses NO bull hooks, weapons or aversive training techniques. PAWS was the first facility to use this “non-dominance” technique successfully, and since 1985, they have been teaching this model to elephant handlers around the world. This gentle training allows vets and keepers to easily perform check-ups and care for the elephants as needed. Nicholas was more than agreeable to do as he was asked (raising his food, opening his mouth, etc.) when offered jelly beans or bran, some of his favorite treats.

As much as I was totally willing and ready to take a few elephants home with me so we could be best friends, it costs around $65,000 per year to care for one elephant, so I think I will leave PAWS to the huge task of providing food, space, nurturing, and specialists to their wildlife. 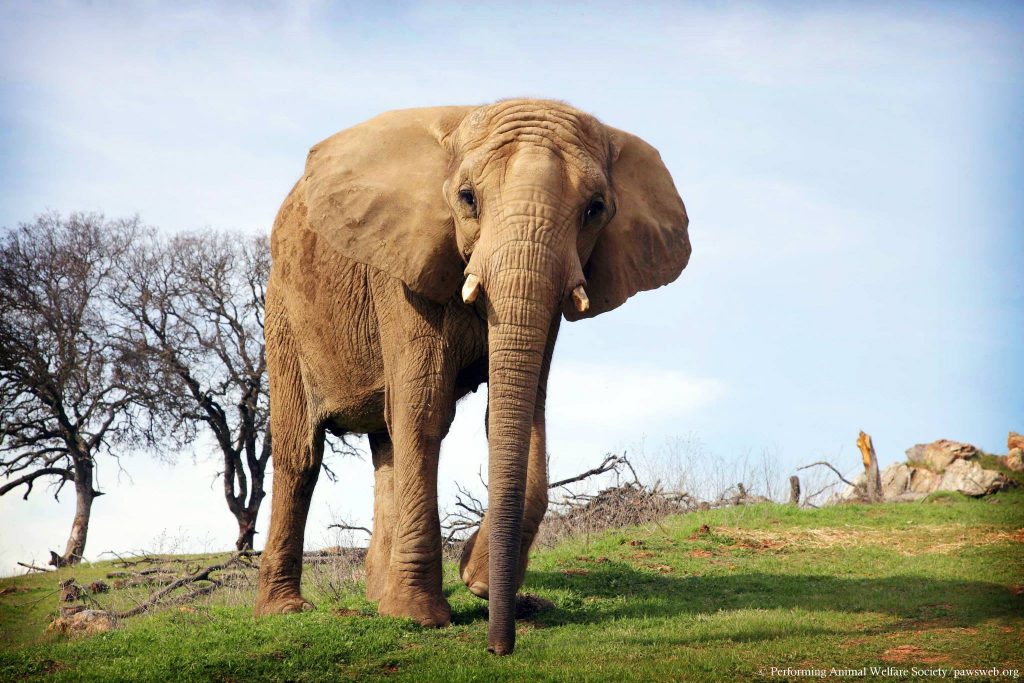 While I never got to share this elephant experience with my grandmother, I’m so grateful that she instilled in me this (late-blooming) adoration of elephants. I hope wherever you are at in your own elephant journey, you one day get to experience the magic of these creatures, and join me in working to end animal captivity. 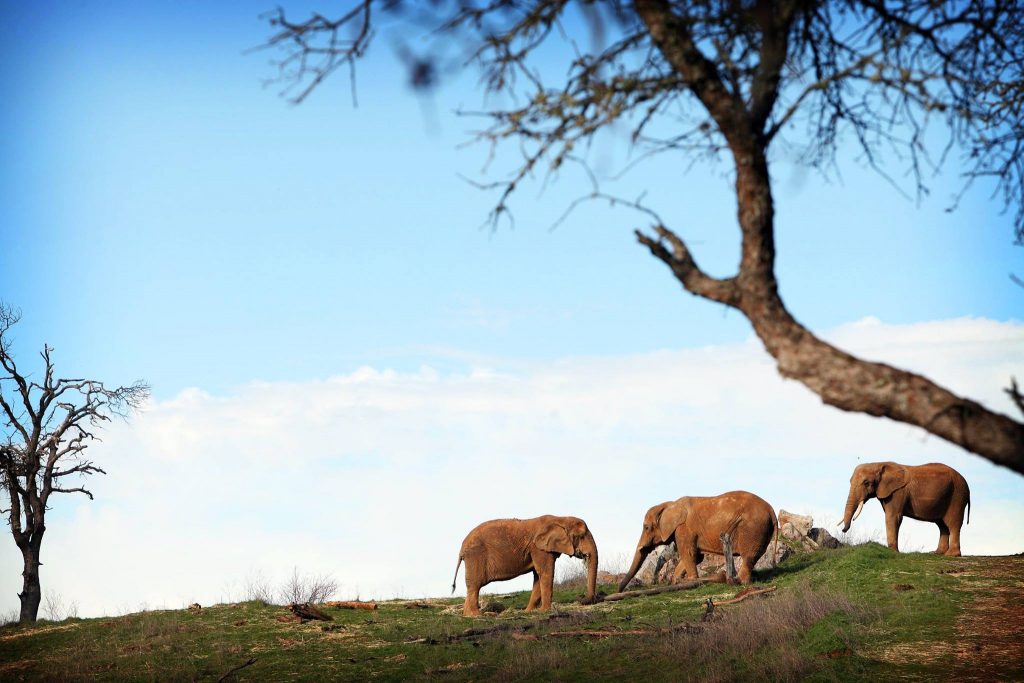 What You Can Do To Help:

And donate to PAWS! You can donate directly or adopt any of their elephants (note: donations are symbolic – you don’t actually get to take an elephant home with you – trust me, if I could, I already would have!).