If there were a distinction between a good yogi and a bad one, I would most probably fall into the latter category. After all, I am a wine-drinking, meat-eating individual who happens to practice yoga on a daily basis.

In an effort to embody the yoga spirit holistically, one of my 2017 resolutions is to become vegetarian. So, at the stroke of midnight on the 1st day of the year, I embarked on a vegetarian journey with the goal of staying vegetarian for at least a month and then decide if this is something that I would continue.

Having had no idea where to begin, I went cold turkey on meat. I replaced my meat with vegetables, vegetables and more vegetables! I ate everything from beans to leafy greens and root vegetables. In keeping with a healthier lifestyle, I also threw out junk and opted to snack on nuts instead. Suffice to say, the results have been astounding.

The very first thing I noticed since turning vegetarian was the improvements I quickly made in my yoga practice on the mat. On a physical level, I became more flexible. My muscles weren’t as sore as it normally would be in the morning, which meant I could move in and out of poses in a more seamless manner. A little research on the Internet enlightened me to the scientific fact that the consumption of meat protein can lead to a build-up of waste products like uric acid and lactic acid in the muscles. This build-up eventually leads to soreness in the muscles and a slower recovery rate.

Mentally, my mind was clearer. I could focus better. There was no tension to be found between my eyebrows, as I didn’t feel the need to strain when holding poses. I breathed better and felt better.

Off the mat, my body felt a certain lightness that it used to lack. I was no longer dragging my feet around in the mornings. In its place, I felt agile. Instead of fatigue and tiredness, I felt energized and ready to start the day. As a mom of a toddler, I find my energy drained by midday, and needing a strong cup of coffee just to make it to the end of the day. But two weeks in and I found that I hadn’t needed that cup of coffee anymore! My energy levels could match that of my son (who, because he refuses to eat meat, is vegetarian by choice).

I later discovered that my extra energy came because my plant-based diet is easily digestible by the body, which enhances my energy. On the other hand, animal foods are harder to digest. The more your digestive system worked to digest food, the less energy is left in store for you to utilize throughout the day.

I Found Awareness Towards My Food

Without me even realizing it, I became more conscious about the food I put into my mouth. In the beginning, it was just a matter of me determining whether or not there were “forbidden” food on my plate. But as the days past, I began to scrutinize my meals. I thought about where they came from and began to learn about the nutrition that they provided. If before, I was ignorant to the kind of nuts I put into my mouth, now I am well versed on their benefits. I learned about the protein that we could get out of beans and the high amount of calcium to be found in broccoli.

Beyond that, I also cultivated a sense of gratitude for the meals I have. I became thankful for the foods that I have on the table and am in awe of Mother Nature’s providence. There is a sense of wholeness in my being knowing that there was no cruelty involved in the nourishment of my body.

A month came and went and I found that I no longer looked for meat. I had eliminated it from my diet and realized that I could continue to live this way without feeling a sense of loss in any form or matter. What I found instead were fulfillment and energy. I am continuing on my vegetarian journey, and hopefully, will make it a permanent part of my life!

Photos by  Brooke Lark and Farsai C via Unsplash 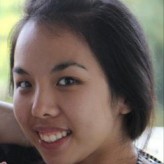 Elaine is a rookie yoga teacher who believes a few minutes a day spent in a yoga practice benefits the body tremendously. She is also a Contributing Writer for BookYogaRetreats.com.