In Southwest Asia between the Mediterranean Sea and the deserts of Syria and Arabia, the fertile land of Israel sighs its picturesque relief against the backdrop of ancient history. With its winter thunderstorms and earth-cracking heat waves, the coastal nation is more known for its theological significance to more than one major world religion than for its breathtaking beauty. Here, next to its largest city and capital, Tel Aviv, designer Lee Coren handcrafts artisan vegan bags inspired by her homeland’s striking and sparkling landscape.

Tel Aviv, with its population of nearly half a million people and bustling tech and business industries, is the perfect coastal setting for Lee Coren’s design work. It’s a marriage of old and new. The city is barely 100 years old, founded by Israeli immigrants in 1909 outside the port of Jaffa, of Yafo in Hebrew. Together, the name Tel Aviv-Yafo means “Beautiful Spring Hill.”

The 29 year old designer started her company three and a half years ago, bringing her mastery of graphic design to the physical world of soft goods. Her first studio products were scarves. She soon moved to bags, and fell in love. As she says, “Something that comes from the city returns to the city. It’s a full circle cycle.”

Lee Coren’s first bag was a fold over clutch. It’s a design she still makes to this day, alternating fabrics and substituting new patterns that she develops in her studio. She’s known for her innovative screen printing technique, which allows her to do things like emboss fine-lined patterns and affix specs of metallic foils to her pieces. What makes her bags special are the materials she uses.

Her dream of being a curator in an Italian museum soon evolved to making products that are beautiful inside and out. Lee majored in Visual Communication in college, and found herself drawn to magazine design and book design. During her last term in school, a class project assigned her to go look for her personal language. She set out on a quest to find what inspires her. She found herself in textiles, an area in which she was inexperienced, and started experimenting and making patterns.

After she graduated and was working as a magazine and book designer, she found herself drawn back to textiles. Not wanted to ignore the calling, she enrolled in various courses in printing techniques and sewing to teach herself the art of textile making. As she says, “I just took a dive in and decided that this was what I wanted to do.” That was three and a half years ago, and how the business started.

Lee started with scarves because that was the easiest way she knew to bridge the gap between graphic design and wearable pieces. As she says, “Because I came from graphic design–my entire process of designing today comes from that foundation–it was easier for me to transition into textiles in a fluid format. A scarf changes when it’s flat and when it’s wrapped. It’s not too complicated for someone who doesn’t come from textiles to experiment with and work with. With scarves I had the ability to really explore textiles and the different printing techniques.”

She eventually developed her own personal printing technique as a result of printing scarves. “Because I wasn’t professionally trained in silk screening, I developed a system that seemed the most logical to me,” she says. It involves using techniques that are normally reserved for paper, but instead transferring ink to pre-shrunken fabrics. Other screen printers who she’s spoken with are often shocked, telling her “That’s not how you’re supposed to print.” But for Lee, being self-taught means she can make up her own rules, taking pieces of what works well from her personal experiences to create a method uniquely her own.

Most of Lee’s items are still screen printed in her studio, giving her a level of control and oversight normally not seen in artisan studio products. A few of the items are digitally printed using an outside studio. For the confetti line, she screen prints in four steps: first, the fabric must be pre-shrunk; then, a special textile glue is silkscreened onto the pre-shrunk fabric; next, the shimmery colored metallic foil is pressed onto the adhesive; finally, the fabric is heat cured in an 180 degrees Celsius (350+ degrees Fahrenheit) oven.

When Lee started making bags, she had already determined that she wanted to use raw cotton, an unprocessed fabric that doesn’t go through the bleaching process. She still uses this fabric today as the base for her woven fabric items. She admits that settling on raw cotton was more luck than knowledge. When she started to branch out and do more complicated bags, she sought out materials that captivated her in the same way that raw cotton does.

She recalls going to a materials warehouse to search for new fabrics for her expanding line of more complicated bags. Lee recalls, “I went to a leather supplier. I couldn’t stay in the store for more than five minutes. The smell of the leather, seeing the animals basically spread on the floor, made me question as a designer whether or not I could seek out better materials. That was a really powerful moment for me.” In that moment, she decided to not use animal byproducts.

Lee feels an obligation as a designer to choose materials that respect animals. “As a consumer, it’s easy to feel like our individual choices don’t make a difference. But as a designer, you have the power in your hands to use or not use animal byproducts,” she explains. She ensure that not only are the base materials animal-free, but so are the glues and entire production line. “I quickly learned that sewing houses that work with leather will also use animal-based glues, which I didn’t want. It was very important for me to make sure that the entire process is vegan,” Lee says.

Starting with being animal-free, Lee applied her new no-harm philosophy to every aspect of production, making her studio zero-waste and as eco as possible. As Lee says, “From there, it was a no-brainer. If I’m doing things that are vegan friendly, it’s also very important for me that the process is as environmentally-friendly as possible. The vegan leather I use is PU and not PVC, which is a lot less harmful for the environment without losing durability and function. It looks great. In the studio, I try to have a minimal waste as possible. Even the smallest pieces of fabric go into the hangtags in an effort to try and not hurt this planet as much as possible.”

Lee’s first collection was completely inspired by the city, drawing on images of broken window shutters, window bars, and mailboxes. “I really like the idea that something that comes from the city returns to the city. Whether it’s a scarf of a bag, it closes a circle,” she says. Most of the fabrics Lee now uses are imported from Italy, including the Italian microsuede, a super durable and long-lasting material originally designed for upholstery originally.

In her new collection, inspired mainly by Athens and the Greek Islands where she traveled a year ago, Lee pulls from new pictorial landscapes and more amorphous shapes and patterns. Her favorite pieces are the roll tops and her original clutch designs, in addition to the newly released bucket totes. Whatever she does next, we can only hope it is as beautiful as what has come before. 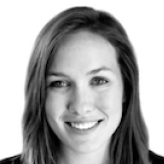