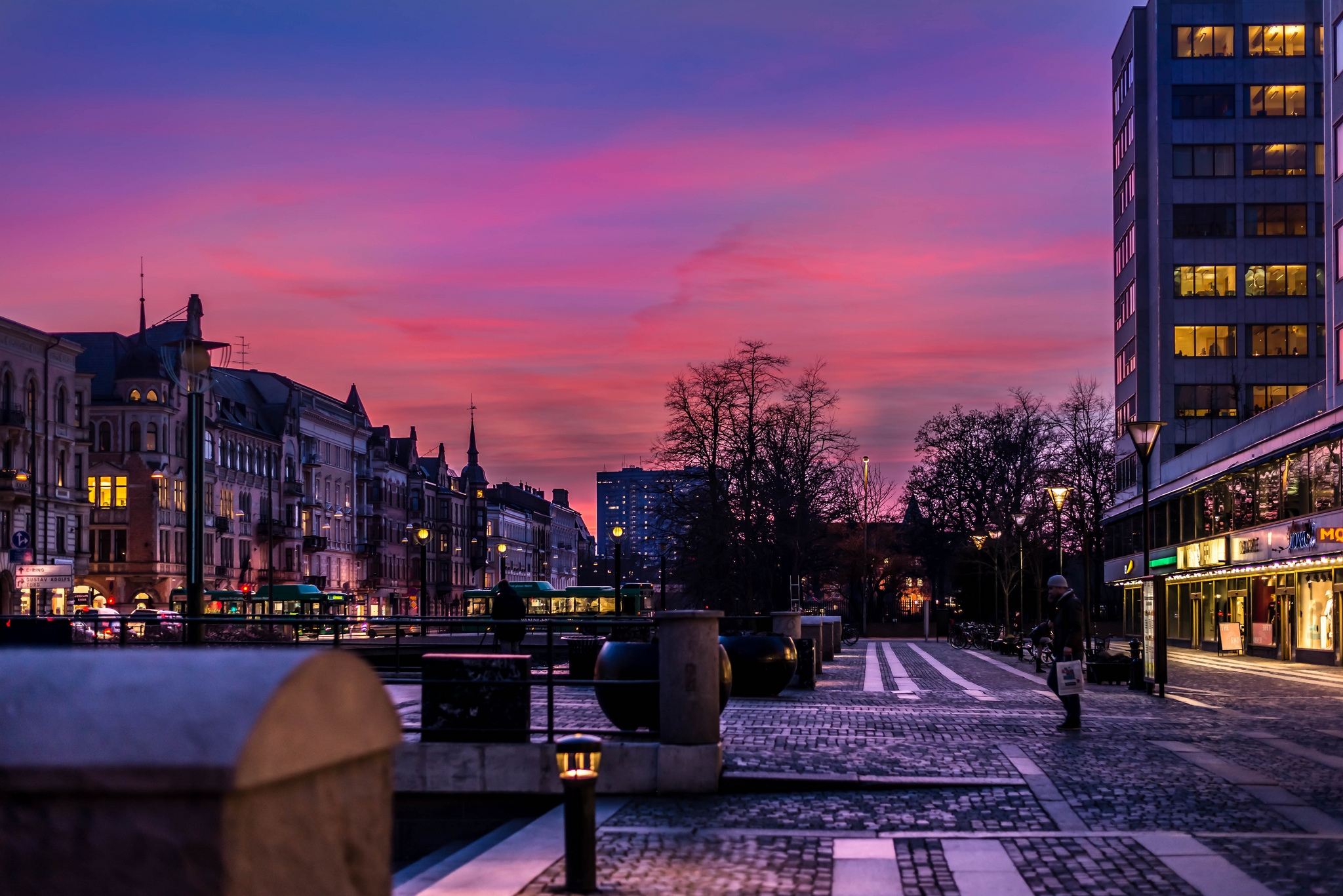 Being vegan in Sweden is fairly easy, but being vegan in Malmö is wonderful. Malmö, the country’s third largest city, is located in southern Sweden and connects Sweden to Denmark with the Öresund bridge. It is also known for the Turning Torso building, Scandinavia’s largest building, which you can spot all the way from Copenhagen on a sunny day. Malmö boasts with trendy cafées where you can settle down for a fika (that’s Swedish for a coffee break), green parks, contemporary museums and all kinds of restaurants. While Stockholm is the capital of Sweden – the cool big brother – Malmö is the charming little brother who will sweep you off of your feet.

Every one in ten Swedes are vegetarian and the interest for health and sustainability in Sweden has risen over the last couple of years – as has the interest for vegan food. Malmö is a city with over 150 nationalities, and it is proud of and celebrates its multiculture and diversity. The Malmöers are not afraid to try new things and maybe this combination of different culture, diversity, and their try-anything-once-attitude is the reason why Malmö has become Sweden’s vegan mecca.

So if you’re planning a trip to one of the Scandinavian countries any time soon, make sure to stop by Malmö and enjoy the vegan scene (plus, you can get to Copenhagen in half an hour – read our Copenhagen guide right here). And while you’re there, make sure to bring this list of the best vegan cuisine in the city:

Malmö is not only Sweden’s most vegan-friendly city, but also its falafel city. Falafel is everywhere and it’s really cheap – you can get away with a falafel and a soda for around 30 SEK (£2.5 / $3.5). There are many good falafel joints around Malmö, but most vegans’ favourite ones are Möllans falafel and Jalla Jalla, both located in the multicultural area of Möllevången. Both restaurants have a vegan menu with vegan meat substitutes for chicken, kebab, hamburgers and also offer vegan dressings and mayo. Of course, you can also opt for the falafel, which is really good in both places.

This is a real little gem in Malmö with a cozy café feeling you just can’t get at your local Starbucks. Lotta and her husband started the café in 2014 with the goal to offer delicious Açaí bowls, but they have now expanded their menu and you will find a delicious three meal weekend brunch, lunch, smoothies and juices as well. And the Malmö crowd loves it – so much so that they opened another branch, one where they only sell their popular Açaí bowls, but says Lotta: “We are still a pretty small family business and we like it that way”. This one is a must visit for breakfast, lunch or just to have a good (eco) cup of coffee. 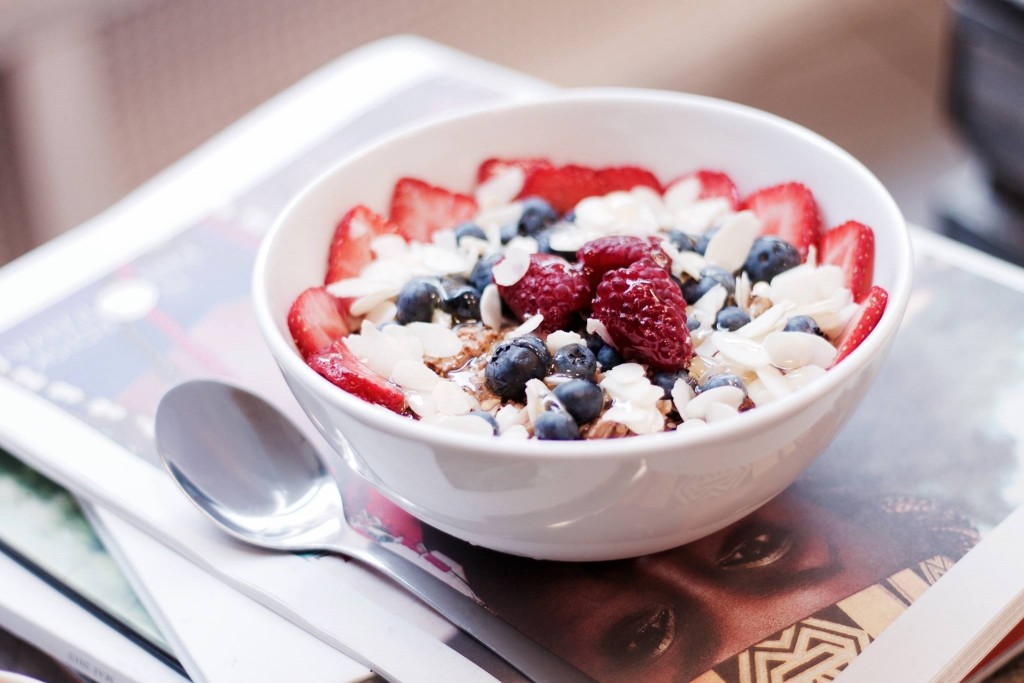 This little café has been appointed the best café in the Malmö and Lund area every year from 2011-2014,  which says a lot considering the many wonderful cafés you can find in Malmö. Sit in the charming courtyard and enjoy a tasty lunch or a vegan home made chocolate cheesecake right in the centre of Malmö.

The Vegan Bar is a fairly new vegan restaurant in Malmö and this is the place to go if you’re a real vegan foodie. “We opened up with a simple goal: to serve homemade vegan food out of the ordinary” Ömur Balsever, the owner, tells Vilda. The place is known to Malmö vegans for their fantastic burgers made from soy mince which is marinated in Tennessee Sour Mash Whiskey. If that alone doesn’t entice your taste buds just take a look at two of the burgers that they serve:

Mushy Mushy (pictured below): Served with fried mushrooms of the season, currently you’ll get it with chanterelles, oyster mushrooms, wild mushrooms and portobello and home made truffle sauce made from organic, KRAV-labelled red wine from Central Valley, South America. 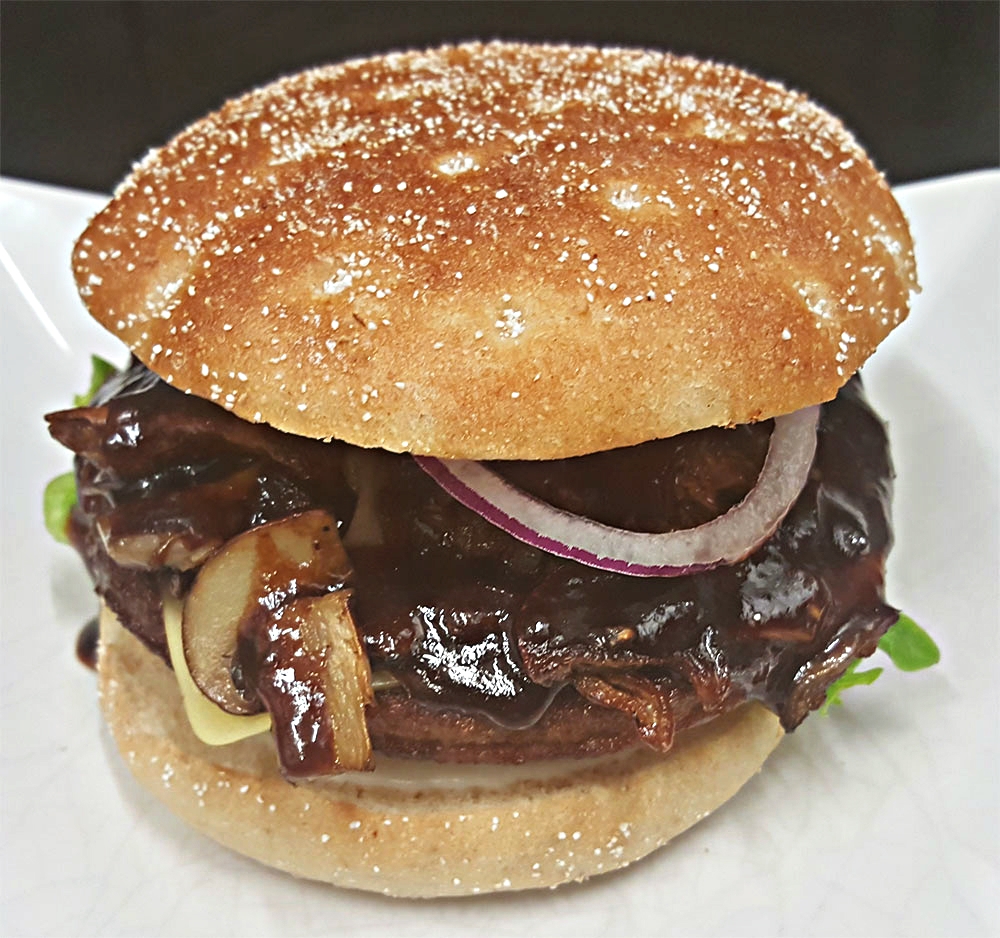 Vegegården was one of the first places in Malmö where vegans could indulge in everything from the menu. Here you will find Asian food with substitutes for chicken, duck, shrimps, beef and so on and it’s all tasty and all vegan. If you come here for dinner, you might want to call and reserve a table beforehand, as it can get crowded but it’s not a must. For lunch, there’s a big Asian buffet, consisting of all the dishes you would normally find in a traditional Asian restaurant.

Kao’s has been a vegan favourite in Malmö for more than 4 years. On the menu, you will always find the daily specials including “Today’s fake”, which is a dish with a meat substitute, our “Today’s vegetable” which, as the name indicates, is a vegetable based dish. You can also choose something delicious from the a la carte menu. If you love sweets and cakes, this is the place to go. If you’re lucky, you might just get to try the traditional Swedish cinnamon bun – vegan and all! The atmosphere is very relaxed and the prices are wallet-friendly, yet the food is heavenly good. The couple who own the place, Kao and Daniel, have been vegan since the 90’s. Vilda asked where the inspiration for opening a vegan restaurant came from and they explained: “As a vegan, one often needs to explain that vegans don’t eat milk, egg or fish and the answer is always ‘But what do you eat then?’ or ‘So you only eat salad?’. One of the reasons we opened Kao’s was to show that vegan food is ‘regular’ food (only vegan) – nothing weird or alternative”. We’re all for that! 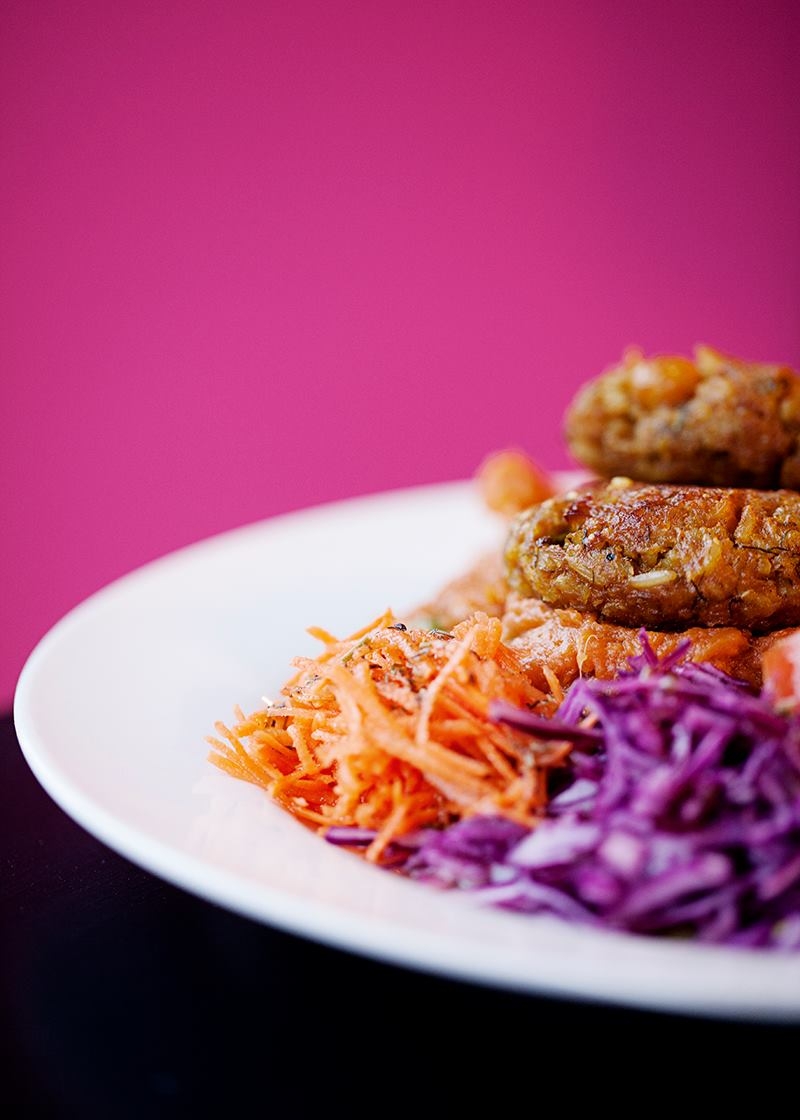 Pizzeria Algarve is located in the outskirts of Malmö but is well worth a trip with the bus. It was the first pizzeria in Malmö to serve delicious animal-friendly pizza. Of course, the pizzas are great and the vegans will love having so many different choices – not exactly something most vegans are used to at pizzerias. When reading the menu there are so many mouth-watering choices that choosing only one can become a real problem, and your only choice will be getting all of them! How do you like the sound of pizza with vegan “chicken”, a spinach- and garlic spread, tomato sauce, rocket salad, vegan “mozzarella cheese” and fresh chili or what about “Green Venice” with vegan “tuna”, tomato sauce, vegan “cheese”, onion, fresh garlic, capers, artichokes and olives.  There’s a lot to choose from, so be prepared for hard choices. If you’re not up for the bus ride, you can also order home delivery for a perfect night in.

O’Learys
O’Learys is not your typical vegan restaurant, in fact, when you first visit, you’d think it was the last place you would find delicious vegan food. O’Learys is a Swedish sportsbar franchise and recently launched vegan versions of their food together with Oumph! – a new, Swedish brand of vegan and climate-friendly food consisting of extracted soya beans that even the hard core meat lovers will love. Here you can get vegan fajitas, nachos, quesadilla and a BBQ Burger (pictured below) with Oumph! instead of meat, as well as vegan “cheese”, vegan mayo and vegan substitutes for dairy. “At O’Learys we welcome everyone and for us, it is important to develop interesting ways forward in our menu and beverage options, which appeal to visitors”, says Wilhelm Vintilescu, CEO of O’Learys Trademark. 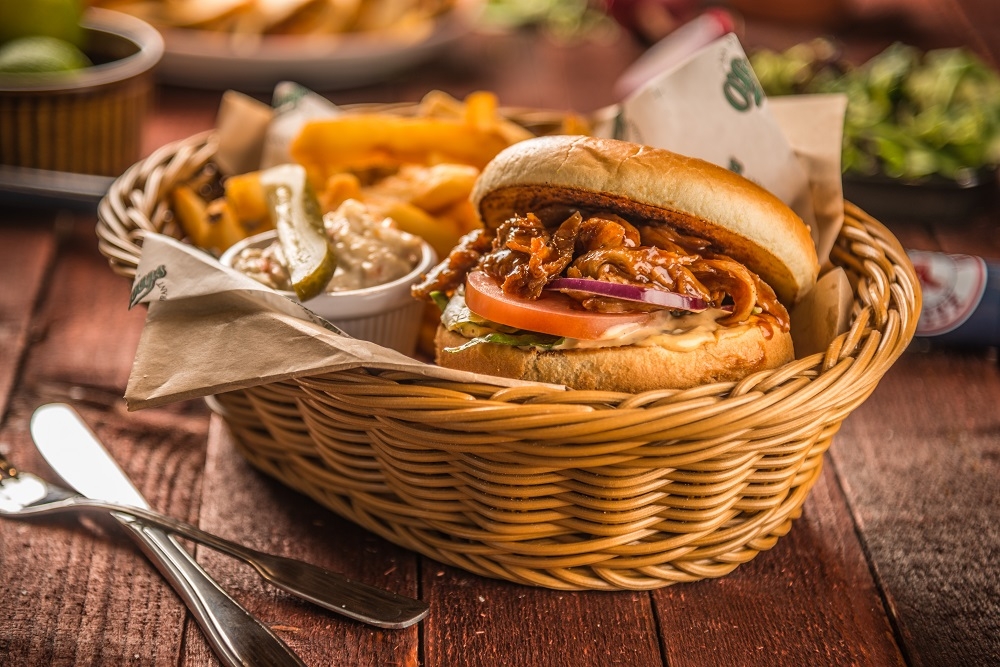 Bloom in the Park

Malmö’s first Michelin-starred restaurant Bloom in the Park is located in beautiful surroundings by the public park Pildammsparken. The concept is quite unusual as this restaurant doesn’t have a menu, as food is served depending on what the kitchen feels like serving that day, but getting vegan food and even vegan wine is no trouble at all. Award-winning international chef Titti Qvarnström is the head chef of the kitchen and you will be amazed by the creations coming out from the kitchen – they’re a real feast for the eyes as well as the senses. During summers you can sit outside on the restaurant’s terrace and enjoy jazz music while you sip on your wine.

Bonus: Visit the vegan super market Astrid & Aporna, where you will find all the typical super market groceries – only vegan.