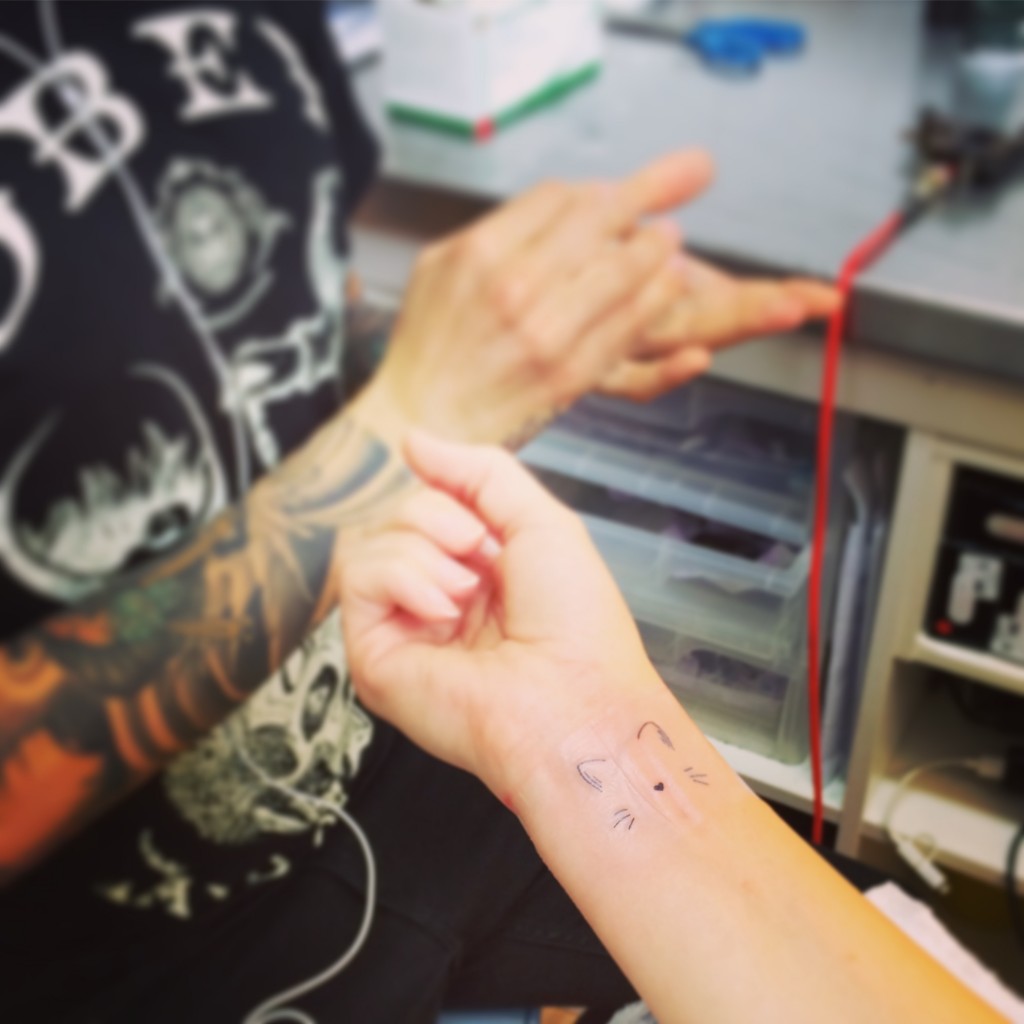 There is a new trend, that literally goes under the skin: tiny little tattoos. Since models, bloggers and celebrities socialized the look of lacy hearts, fancy stars and lovely words or writings on wrists, ankles and necks, everybody wants to get inked. So did I. But aside from choosing an image and finding a good studio, there was another thing I had to consider: Not all colours are vegan. Yes, you read that right: Some brands contain bone ash and other non-vegan ingredients. And who would like to have a dead pig or cow under his skin? So I seeked advice from Andrea Bizzocchi, a 28 year old tattoo artist from Rimini, who currently works at Tattoo Nouveau in Hamburg – and got a cute and cruelty free cat tattoo!

Andrea, how long have you been vegan? What made you change your life?

I have been vegan and straight edge (no alcohol, no drugs, no animal products) for 10 years now. Back then I was a singer in a metalcore band called “A Virgin Burial“ and we were on tour with another band from the U.S. – all of them were vegan. I really couldn’t imagine what it was about, mainly because I didn’t eat many vegetables at that time. I was only 17 years old and in 2003, beeing vegan in Italy was extremely tough. It was so difficult to eat anything outside your own house, but I was curious, if I could do it. So I gave it a try – and I am happy with my decision. I know I cannot save the world, but I can do my part.

And how long have you been a tatoo artist?

That’s two years and a half now. Before that, I worked as a fashion photographer in Milan. But after some time, I got tired of the job and returned to my hometown. A friend was opening a tattoo studio and hired me as receptionist. After a while I became a drawer and then I thought: „Maybe I should try a tattoo“. 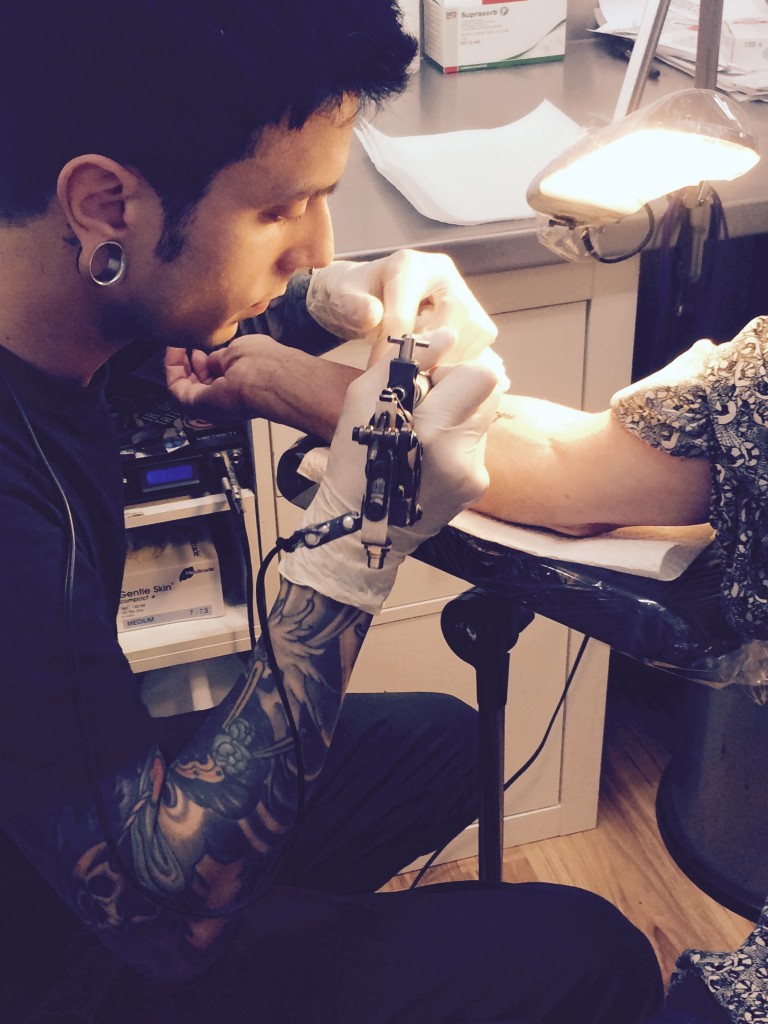 Wow, that’s amazing. Where did you do your first tattoo?

On my leg!:) It’s a rose with a bear’s head inside. It looks okay, but all of my friends are like: „What is that horrible thing on your leg? You have a lot of good stuff, but that one is awful!“ But it’s my first one and I don’t want to cover it, as it is probably the most important that I have…This was the beginning of the whole thing.

You are using vegan colours. Why are some colours not vegan?

Most colours are vegan. But some black ones do contain particles of animal bones and also very bad chemicals. Thankfully, in Europe we have very high standards, but in the U.S. they just don’t care. They use regular ink, because it’s the most intensive black. But it’s dangerous and can result in cancer and other serious illnesses.

How do I know, if a colour is vegan or not?

You should ask the artist, which colours he is using. The best vegan brands are Eternal and Bullets. They have a great quality and many tattooists are using them without even knowing that they are vegan. 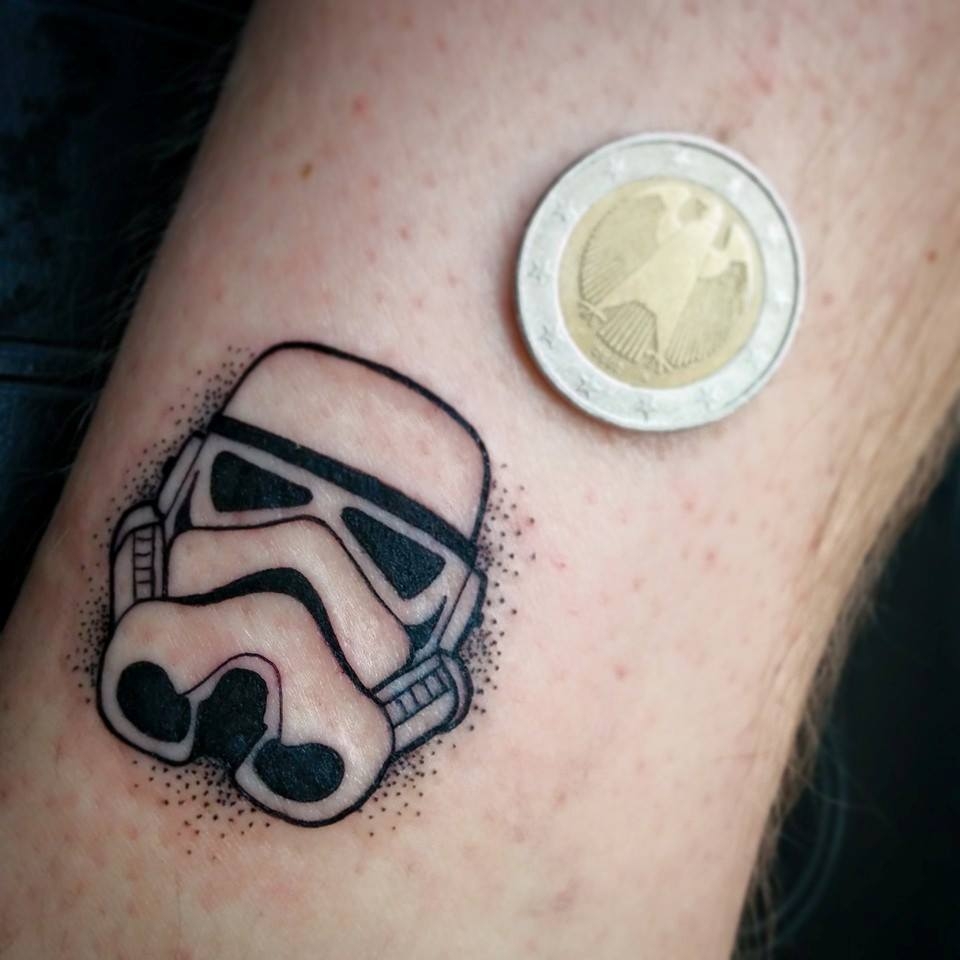 Did the number of tiny tattoos increase during the last years?

Yes, the small tattoos are a big trend at the moment, especially for girls. And that’s okay. Not every tattoo has to tell a story, sometimes it’s just something you really like.

Have you ever denied to do a tattoo and why?

I often say no. Sometimes because it’s not my style and I think someone else should do it. But mostly because I think the images are….well, ugly. I don’t want people to regret their tattoos later, so I’m always honest.

After having been a singer, artist and photographer – is beeing a tattooist your favourite job?

I don’t know, if I want to do this work for life. If I don’t change every two years, I’m going crazy. But I’m almost 30 years old now and I think it’s time to have a steady job, a forever home and a family.

Well, I wish you all the best! Thank you for the interview! 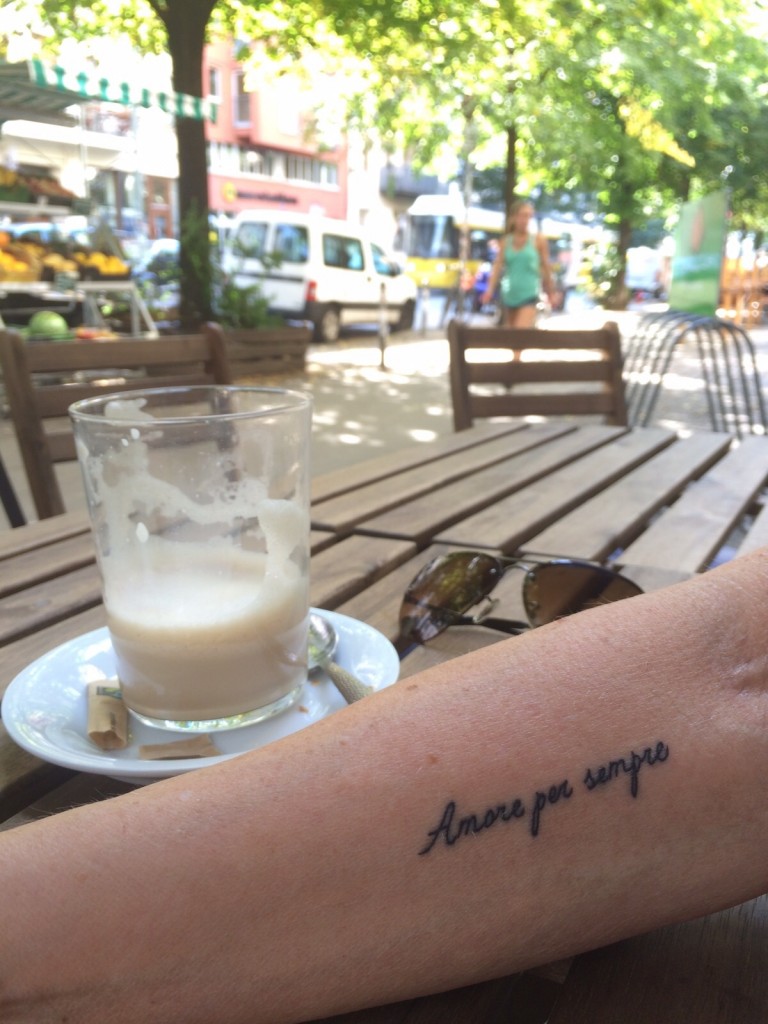 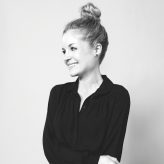