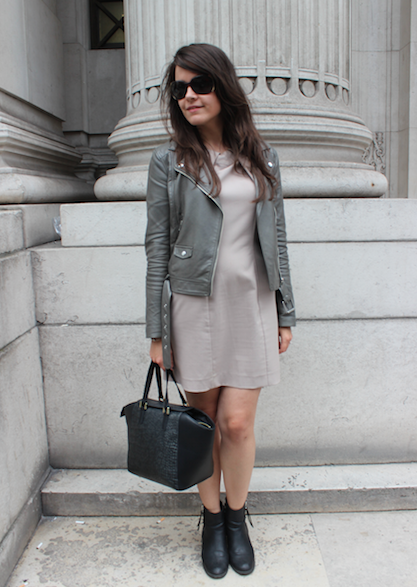 While I was ever-so-enthusiastically telling them about starting Vilda, one of the two interviewers interrupted and came out with, ‘so you’re vegan…but you want to work in fashion?’.

Now, hold on. First of all, I don’t ‘want’ to work in fashion, I have six years of fashion experience under my belt. I may not be Anna Wintour, but having worked in e-commerce and magazine publishing in three European countries, I’m hardly a wide-eyed graduate. And with all due respect, some of the names on my CV were much more well-known than this relatively obscure start-up company. Secondly, why do you think so many celebrities are vegan? Aside from the benefits we all know so well, veganism is a trend, and a growing one at that. Vegan designers are popping up at Fashion Week and Hollywood A-listers are carrying leather-free bags to red carpet events. Veganism is here to stay, and by “here” I mean your closet.

I replied to the question explaining my passion for innovation and creativity, and that vegan fashion definitely falls under that spectrum. She kept bringing up Stella McCartney, so I mentioned a few other vegan designers such as Morgan Bogle of Freedom of Animals and Elizabeth Olsen of OlsenHaus. I also reminded her that Vaute Couture had shown at NYFW and faux fur was one of the season’s biggest trends. Unimpressed, she wouldn’t leave the issue alone. ‘It’s just so…unusual.’

But it’s not unusual. I’ve met several vegans and many vegetarians while working in mainstream fashion companies. Most of them are veggie for health reasons, but some are ethical vegetarians or vegans like myself. And it’s not a coincidence that London’s veggie eateries are all based in the city’s hottest, trendiest areas. I find it hard to believe that this style entrepreneur who spends her days around fashion industry people on all kinds of diets had never met a vegan before? In the end, most of the interview was about my diet and lifestyle and, unsurprisingly, neither of us ever heard from the other again. But I realised just how much of an outcast you are in some people’s eyes if you simply choose to live a lifestyle that does not harm living beings.
It’s unconventional, I’ll give that to her. When I was younger, before I first went freelance, I was very attracted to the concept of ‘nonconformity’. I read all those inspirational, but still quite nonsensical, books and websites about ‘living your dreams’ and ‘going your own way’ – except each and every one of them boiled down to the notion of going freelance as a means of being nonconformist and living ‘the life you were meant to live’ – a concept that, as I discovered by actually living that lifestyle, is as beautiful as it is unrealistic, since being a freelancer is exactly like any other lifestyle, not better nor worse. But unlike actually having a desk and a paycheck, freelancing is Pinterested around as The Dream, one you can attain if you just work hard enough. Which I did, to find myself desperately latching onto any client that would pay me just so I could, you know, eat. I questioned if this was really the ‘life I was meant to be living’. It wasn’t until I was offered an assignment to do a shopping page on fur for the website of one of the world’s most influential fashion magazines and turned it down based on my beliefs that I realised that by being a vegan who worked in fashion, I was already as non-conformist as they come.

I didn’t always realise how much of a maverick I and those like me would come to be. I remember a fashion-school classmate who asked me, ‘but how can you not wear leather shoes? That leaves out so much’. I also remember the head of my department in the same university who, upon hearing that I was vegetarian, told us a story about a former student who refused to go to a snakeskin manufacturer exhibition because of his animal-rights beliefs, to which she, the head of the department, told him that maybe he had chosen the wrong field for his career. Thus telling a paying student that he should take his skills and passions to a different institution. Seven years on, I sincerely hope he did.

So I went through university, my first internships and jobs feeling that being a compassionate shopper made me an outcast. That there was something wrong with me for being unwilling to ooh and aah over fur collars and calfskin boots. Then I moved to London, where everyone was different and no one strived to be like anyone else. My blog, Coffee and Heels, morphed into a vegan fashion and lifestyle site. I started receiving emails from compassionate brands who wanted to work with me. I started writing for vegan and sustainable websites. And I understood that a vegan in the fashion industry was simply who I was. I wasn’t ready or willing to sacrifice either one: veganism is one of the best decisions I’ve ever made, and fashion is something I’m deeply passionate about and that excites me every day. So I decided to think of a way to combine the two. And when my quirky combination was picked up by Marie Claire’s Inspire & Mentor Scheme, leading to the launch of Vilda, I realised that maybe ‘unusual’ was, for once, the right thing to be.

That’s why, when I met that woman at the job interview at the café, I knew exactly how to respond to her. After years of defending myself, I finally feel like being vegan in the fashion industry is an advantage, something that sets me apart, rather than a weird, uncomfortable trait. And seeing designers, bloggers and celebrities tuning in to the cruelty-free trend is music to my ears. It’s time to step out of the conventional way of doing things, open our eyes and dive into innovation.