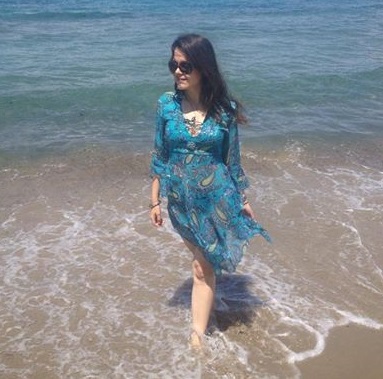 Being a new bride sure is exhilarating: the endless congratulations, the novelty of a sparkling ring on your finger, the wistful flipping through the photos of you in your beautiful dress…and the blissful knowledge that very soon, all the planning and organising will be well behind you as you jet off on honeymoon.  Immersed in pure relaxation and indulging all your senses, away from everything and everyone.

…if you’re a regular bride, that is.

For vegan brides, the honeymoon anticipation, as well as the choice of destination, tends to boil down to one crucial question: What Will I Eat?

Although, with us vegans, isn’t that the case with most trips? When selecting a destination, we’re googling, researching supermarkets, scanning menus…or is that just me?

My honeymoon to the tiny village of Agropoli, near Salerno on Italy’s Amalfi coast, brought up more than one conundrum. Luckily there was a kitchen, but could I dare confide in the local supermarkets for a sufficient selection – in a place where “vegan” probably isn’t even a word? And as for eating out, how many veggie pastas and pizzas could one person ingest in one week?

A week later, I had my reply.

Turns out, Italy (yes, even the south) is waking up to this new culture: Chef Express, a popular brand of station and airport “quick stops” for food, has introduced both a vegan sandwich and a vegan salad, which we tried in Rome’s Fiumicino airport. Delicious, especially the sandwich with grilled veggies!

For any vegan traveller, I’d say the trouble starts when you’re invited to dinner. In our case, fate would have it that some of my new hubby’s relatives lived in the village we were visiting – it was amazing to see the places where he’d spent his summers as a kid, less amazing when his aunt insisted to pick us up for dinner straight from the beach, leading to me sitting in my bikini and sundress at a table full of politely smiling strangers who were wondering who the heck this sandy stranger was and why she wouldn’t have any of their trademark mozzarella. I survived by over-complimenting the wine, the bruschetta (pronounced “brusketta”, NON “brushetta”!) , the pasta with mushrooms.  And I literally survived by ingesting as much as I could of these things!

For breakfast, I chopped up fruit and made a lovely macedonia (fruit salad) – healthier and tastier than the traditional croissant! Kudos to the supermarket for stocking soy and almond milk. And milk-free dark chocolate!

For lunch, well, I’m lucky enough to be married to an amazing cook (his abilities in the kitchen definitely played a huge part in my decision to say yes to his proposal!) and lunches were served up courtesy of my hubby’s wicked ways with pasta, rice and delicious salads with beans, tomatoes and avocado.

For dinner, things got more complicated. Pizza, the obvious choice for dinners at seaside restaurants (where the feeling of outcast-dom for not eating fish constantly hangs over your head), was alternated with home-cooked dinners of veggie burgers (yes, really! Yay supermarket!) and grilled veggies.

Pasta-wise, I ate about three plates in a week – two more than I usually eat – all of them home-cooked and absolutely perfect.

Since veganism goes beyond just food, I must, begrudgingly, admit that accessories shopping the cruelty-free way in the South of Italy can only be defined as a nightmare – unless you’re okay with 24-hour Hawaiianas. Finally finding a pair of black studded rubber sandals in a sea of leather, leather and more leather was like finding a leafy oasis in the middle of Sahara. Ditto for beauty, even if I was surprised to find cruelty-free shampoo in the supermarket, which is getting a crazy amount of love in this piece – but they do deserve it!

A tip for travelling vegans: do prepare for the actual day you’re travelling. I regret to say that, since I came unprepared, the aforementioned vegan sandwich at the station in Rome saved me on our way back. Bring salads, sandwiches, fruit, anything. You won’t regret it!

Discovering new cultures is always a thrilling adventure, and food tends to play a big part in my travelling – that hasn’t changed since I went vegan.  Exploring a country’s food traditions and figuring out how to carve out your own (in my case, vegan) niche within them is an adventure of its own. Not to mention shopping and fashion!

As tricky as being a travelling vegan might prove, it definitely can be done – and if done well, it has the potential to be truly delicious. Try and see.