Feminist. There are few words in the International Vocabulary as loaded with tension as this word. It is a word that has so many different connotations — almost as many as there are people on this earth.

A few hundred years ago, a feminist was someone who refused to adapt to the dominant gender conventions, and the word was used in a pejorative sense. In 1892, it was launched as an expression of women’s rights. The use of the term “feminism” is now generally accepted as a label for criticism of sexism and male dominance, arguments for an improvement of the female condition, and demands for a public voice for women speaking on behalf of their sex. That’s what the encyclopedias say – and it well summarizes the issue.

Are feminists oppressive of men?

There is abuse of women all over the world; physically, economically, socially… still, there are movements working against feminism. There are a great number of people claiming that feminism only propagates hatred between the sexes – and I see their point. I really do. Some feminists who make a lot of noise can appear oppressive. And yes, some feminists are oppressing of men. Which is rather counterproductive. If women oppress men, how can we be equal? If we meet sexism with sexism – what will we accomplish? Nevertheless, feminism is as necessary as it is controversial.

Why do we need feminism?

In Western society, there is still great inequity despite over 100 years of struggle. According to a recent EPI study, women in America are at a disadvantage to men in terms of equal pay from the minute they start working — even when they have the same education. Another report, by the American Association of University Women, concludes that women gets paid 77 cents on the dollar, compared to men (for the exact same job, and with the exact same education).

Another important aspect of feminism is the female body, and the female role in society. Feminism is about telling girls they can be anything they want to be, even an engineer or a fire-fighter. It’s about not (one way or another) forcing them to look a certain way in order to be accepted in society.

“The first thing the advertisers do is surround us with the image of ideal female beauty, so we all learn how important it is for a woman to be beautiful, and exactly what it takes. […] Women’s bodies are still turned into objects, into things. […] Turning a human being into a thing is almost always the first step towards justifying violence towards that person.” – Jean Kilbourne

Feminism is about not featuring naked women alongside fully clothed men in advertisements and music videos. It’s about social media not being flooded by images telling women they are not enough. It’s against objectifying and demoting women to be nothing more than something pretty to look at or sleep with. It’s about getting justice if raped. It’s about the entertainment industry not playing with the fine line between sexy and child pornography. Feminism is also about a man being able to be something other than the “typical man” (fit and tall, successful and rich, handy and tough), if he wants to. Plus, feminism has made the world a better place for men, too (can anyone complain about having more satisfying sex?).

Are you a feminist?

If you agree on these points, the answer is yes:

No, feminists of 2014 do not burn bras. They are not bitter lesbians. They don’t hate men (a lot of them are men!). Feminists just want women to be more than objects. Is that really too much to ask? 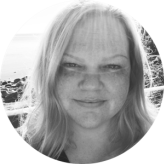 A Swedish motivational speaker and blogger, Editor in Chief for a Swedish lifestyle online magazine. Passionate about helping young people feel good about their bodies - in all shapes and sizes, applying the notion of Cruelty Free on ourselves as well.