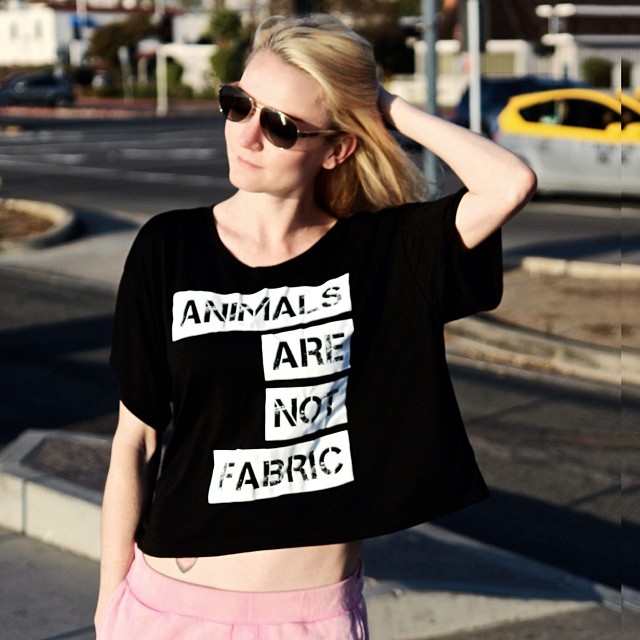 One of the reasons why we love entrepreneur and activist Jessica Schlueter’s site, The Tree Kisser, is because it sheds light on animal abuse issues while promoting the fun and stylish side of cruelty-free living. The site’s creator, Jessica, agreed to chat to us about her passions and lifestyle, and the five products she can’t live without.

Hello! Thanks so much for giving me the opportunity to meet your fabulous followers! I run a cruelty-free lifestyle blog along with my recently launched apparel line. I am also the director of the Love Infinitely Project Animal Fund, which allocates resources to deserving animal rescue or advocacy groups. I live in San Diego with my boyfriend Chris and four insane but adorable dogs. My goal is to inspire and educate people who are curious or confused about living a compassionate lifestyle.

Tell us about your transition to a cruelty-free life.

I went vegetarian when I was eight years old after making the connection that pigs (my favorite animal) were being slaughtered for bacon (my favorite food). Even before that change I was always very concerned about preserving life; there are home videos of three-year-old me refusing to go down a slide because I saw some ants and didn’t want to squish them.  I was going about vegetarian living all wrong, eating tons of white carbs and LOTS of dairy. My Mom didn’t really know how to feed a vegetarian child, and I certainly didn’t make the effort to learn about it, so we both accepted my doctor’s false declaration that I needed to start eating animals again. About three years later, I realized I just couldn’t accept eating meat, so I told my Mom I was going vegetarian again; somehow she surrendered and decided to allow it. Fast forward to July 2008, the summer after I graduated college. Late one night I decided to watch an episode of the show “30 Days” entitled “Animal Rights”. It followed the journey of a hunter from the South spending a month with a vegan family in LA. I mostly watched because I thought the premise sounded funny; I had zero idea that it was about to change my life. Prior to that viewing, I thought vegans only abstained from animal products because of some spiritual belief (that I’d written off as weird and hippie) that milk, eggs, and honey belonged to the animal, and therefore it was wrong to take them. While a version of that belief does contribute to my current vegan philosophy, it disregards the fact that the animals providing these materials are living completely hellish lives of deprivation, exploitation, and cruelty. In the half hour of television I watched that night through teary eyes, I received a crash course in those industries. I saw day old veal calves torn from their mothers in dairy farms, I saw male chicks thrown into a macerator to be ground up alive because they wouldn’t produce eggs, and more than anything I made the connection that farmed animals are, for the most part, treated as products for profit rather than beings worthy of ethical consideration. I couldn’t believe how misinformed and naive I’d been. I decided that night I had to go vegan. My Mom cried.

Fortunately, my decision to go vegan occurred about a month before I moved from Denver to Los Angeles, the vegan mecca. Unfortunately, because I didn’t know or really communicate with anyone vegan, I was completely unaware of the multitude of fully vegan restaurants in the city; I was just thrilled that restaurant employees actually recognized the word when I went out with friends. It took about a year and a half (through which, I’ll regretfully admit, I struggled with cheese addiction and cheated a few times) for me to start reaching out to the vegan community and actively getting involved in events and movements for change. After years of taking part in various forms of activism, I now consider myself so lucky to have such a supportive, creative, fun, inspirational, bold, compassionate social circle; I’m constantly in awe of how fortunate I am. Also, my once staunchly anti-vegetarian mother (who taught me all I know about compassion, but just hadn’t yet fully extended it to non-humans) and my brother (who spent his childhood waving bacon in my face) have both been vegan for about four years!

I started my blog the summer of 2009. I was working on a film set in Seattle, and the production had temporarily shut down due to budget issues. I was stuck in a new city with nothing to do, so a friend basically dared me to start a blog on Tumblr. I wrote about food, animal agriculture, my opinions on differing styles of activism/advocacy, fashion, and beauty products. My goal has always been to portray a cruelty-free lifestyle as fun and attainable (because it is!). I want people to know they don’t have to turn into whatever preconceived stereotype of vegans they have (we all had them, right?). They can continue being themselves, following their passions, embracing their hobbies, and spending time with their friends; they just have to subtract the animal exploitation and replace it with compassionate choices. My job is to find those compassionate choices and share them.

I grew a following pretty organically over the first year or two and eventually branched out to Facebook, Instagram and Twitter. This past year, I’ve moved the official blog over to WordPress and recently turned thetreekisser.com into my online shop. It hasn’t been a very consistent journey. My content changes unpredictably due to my current moods, obsessions, and projects. I’ll go months without posting recipes, then share five in a row. Since launching the apparel line, I’ve been the world’s worst blogger. I haven’t been writing much at all, despite the fact that I love writing and always have way too much to say. I’m still a work in progress, constantly trying to figure out exactly what role I want to play in the world, what messages I want to send, and how best I can serve the lovely people who follow my words and work. Fortunately I’ve always had a very supportive group of followers, and they typically aren’t as hard on me as I am on myself.

How did you start your clothing line?

I’ve always felt there was a gap in the world of animal rights apparel (my line isn’t entirely animal rights related, but this was the impetus for launching the collection). The tops I felt had creative, compelling slogans never had styles that appealed to me, and others had wording that was too aggressive for my methods of outreach. I often found myself thinking, “I wish someone would make a top that said ________,” or “I love the top that so and so makes, but I wish the words were more legible and on a more fashionable shirt.” Finally, during a time when I didn’t have many other projects going on, I decided I would have to be the one to turn those wishes into reality. I knew I wanted to use a portion of the proceeds to support animal rescue and advocacy organizations, so I also set up the Love Infinitely Animal Fund, which I direct as part of my duties to the Love Infinitely Project Board of Directors. I donate 10% of The Tree Kisser sales to the fund, and then allocate those resources to deserving non-profits or animal related projects.

I spent about a month working on the first three designs and choosing garments from different suppliers, and then I was off and running. I’m still my only employee and I work out of our loft apartment, but I’m very excited about what I’ve accomplished thus far. I get giddy every time I see someone post a “selfie” in Tree Kisser apparel on social media. I’m still in awe of the fact that I’m creating things that people are willing to pay for! It’s already been such an adventure, and I have a lot of big plans lined up to help grow the brand this year.

What do you think the future of vegan fashion looks like?

Last year I walked into a Nordstrom in Las Vegas and saw a big “Vegan Skirts” sign hanging above a rack of faux leather apparel. To me, that is a huge indicator that we’ve moving in the right direction. Just a decade ago, people were embarrassed to wear faux leather because it seemed cheap or tacky. With so many innovative, fashion-forward, eco-friendly, chic vegan designers and companies popping up, I believe that stigma is not only gone, but has reversed. Whenever I get compliments on my OlsenHaus boots or Leni Penn bags, I always tell people that they’re vegan materials. Almost every time, the person is fascinated, impressed, and wants to know more. All you have to do is flip through the pages of the newly established Laika Magazine, which features vegan fashion and beauty, to see the abundance of compassionate couture hitting the scene. As long as we continue to promote, discuss, and financially support cruelty-free fashion, I really believe it will not only expand but also become desirable and fashionable for mainstream consumers. I’m not blindly optimistic; I understand that fur sales are up and there’s still a lot of information we need so spread. I know we have a battle ahead of us, but I believe it’s a battle we are going to win. 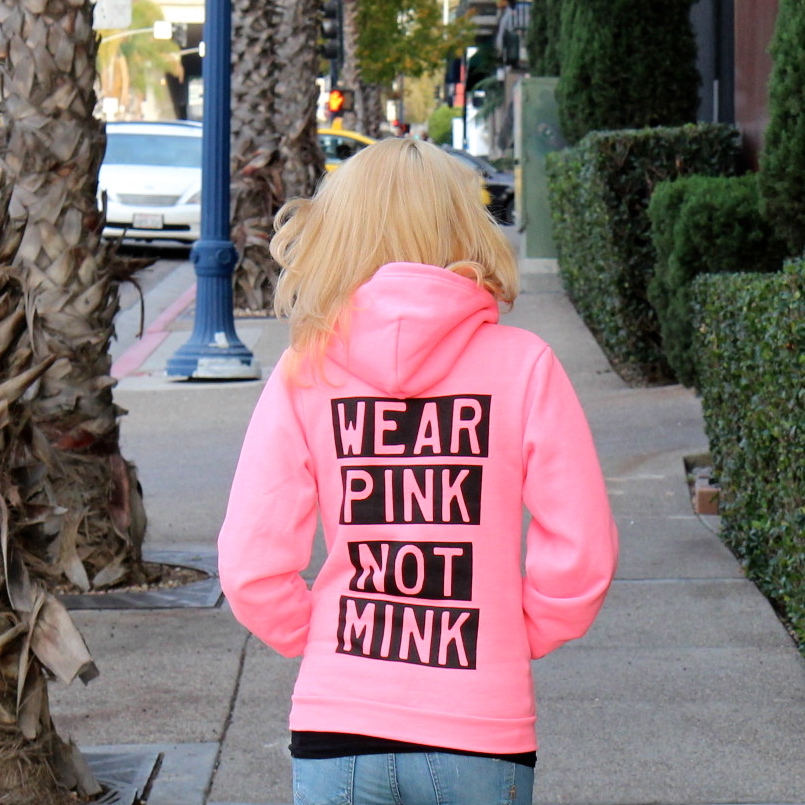 As usual with our Fab Five, we asked Jessica to choose five products she loved. Here’s her love list! 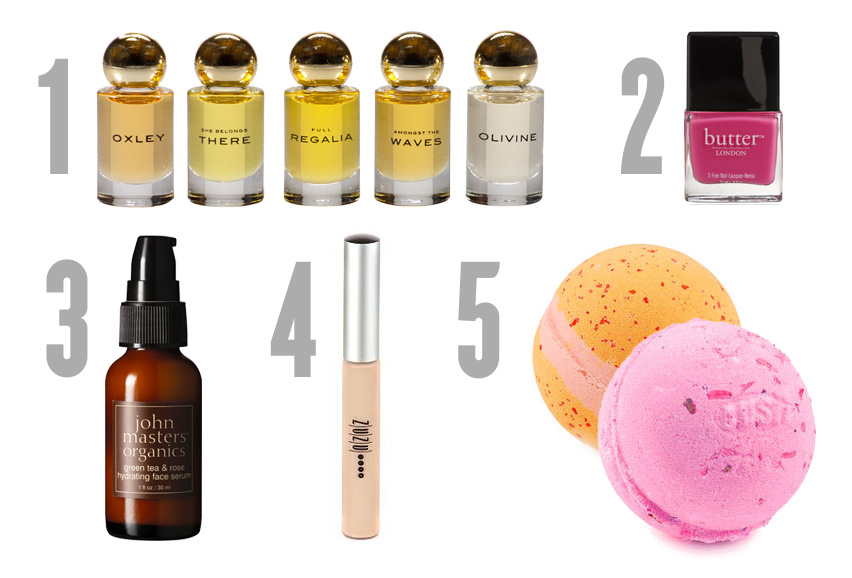 2. Butter London nail lacquer in Primrose Hill Picnic. I’m down with anything pink, but this shade is one of my favorites.

5. Lush Bath Bombs. I’ve become so addicted to these that I can’t take a bath without one.